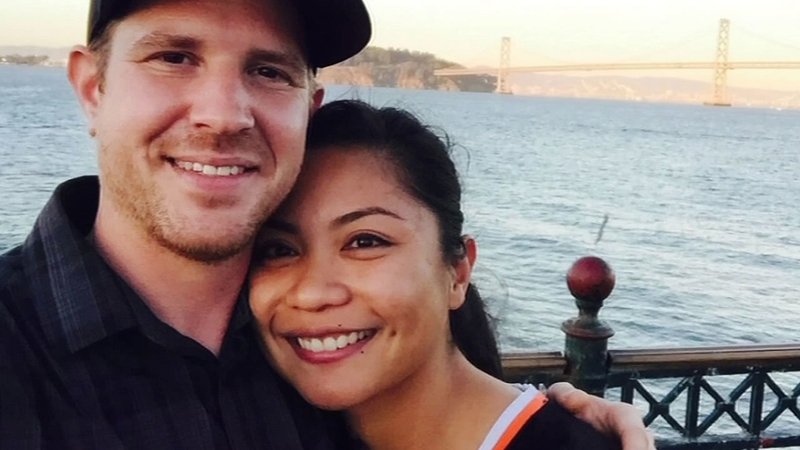 SAN FRANCISCO (KGO) -- Millions of singles are looking for love by swiping left and right on their phones, but can you really find the perfect match by using a dating app? 7 On Your Side takes a look at just that.

These apps have created a whole new online dating scene and one Bay Area woman said it changed her life. She was convinced all guys her age were attached, until an app showed her that hundreds of bachelors were just footsteps away -- all she had to do was click.

Irene Fuentes was driving to work when a BART train whizzed by and her cellphone suddenly got an alert.

"If it wasn't for that, I never would have met him ever in my life," Fuentes said.

It so happened that Mario Anhoeck was riding on that BART train. His phone got a message too.

"It's weird in the beginning, it's more like a game," Anhoeck said.

An app on their phones was alerting Fuentes and Anhoeck their paths had just crossed. Maybe they'd like to meet?

Fuentes said, "I saw his profile. I thought he was cute, so I let him know I liked him."

They'd both signed up with Happn, a dating app that uses GPS to notify members someone nearby is looking for love.

Fuentes said, "You get on that app, and there are all of these single guys everywhere."

She could peek at the profiles of bachelors nearby and even track where they go. If she liked someone she explained she could say, "He's somewhere near me right now. I could try and look for him if I wanted to. To say, 'Hi, look to your right.' It's kind of creepy, but it's kind of funny at the same time."

"You look over people's shoulders and they're just like scrolling through people," Anhoeck said.

I've seen a couple co-workers on there and I don't tell them I see them because I know they see me on there too, but that's kind of awkward. I don't want to say, 'Hey, so you're single too?'"

Happn is one of the thousands of dating apps packed into iTunes and Google stores, each touting its unique way to find you a match.

"There's sort of a mystique and magical feeling about connecting with someone who has a similar lifestyle to you," Julie Spira, an online dating author, said.

Spira says some apps are off the charts. Sizzl connects only singles who love bacon. Then there's Twindog matching dogs and their owners. Wingman connects airline passengers who will be on the same flight. Salad Match sets up salad lovers for a salad lunch.

Spira explained Bristlr. She said, "And that is where you can basically rub faces with someone who has a beard, if that's your fancy."

Now back to Fuentes and Anhoeck. Can romance bloom when a car crosses paths with BART? They said they went on that date the following Wednesday. He was attracted to her smile and she says she felt like a teenager with butterflies in her stomach. They clicked really fast and they are still together six months after meeting on Happn.

All the apps we talked about are free, but be warned they do not screen their users. However many do link to their Facebook pages -- that can help you find out a little more about a potential date.
Related topics:
societysan franciscodatingsocial appsrelationshipsonline datingtechnology7 on your sideappsbart
Copyright © 2022 KGO-TV. All Rights Reserved.
7 ON YOUR SIDE
California suspends some disability claims, citing fraud
Majority of KN95 face masks sold online are fake, doctor says
Facebook pulls out big guns to fight small claim by East Bay father
Hiking trip organizer accused of using deposits for personal use
TOP STORIES
How injury-riddled 49ers can beat the Green Bay Packers
At-home COVID-19 test request website goes live 1 day early
FedEx driver perfectly launches package at front door of SF home
Doctors weigh in on what future of living with COVID looks like
Here's how you can get free home COVID tests
New date, venue announced for Grammy Awards
Sickout planned in Oakland as students go back in Hayward
Show More
Calif. students to get subsidies for volunteering
Report: Amy Schneider would consider hosting 'Jeopardy!'
Bay Area native killed after man pushes her in front of NY train
Minneapolis men's knitting group continues to grow
Local Native Americans oppose replica mission bell installation
More TOP STORIES News