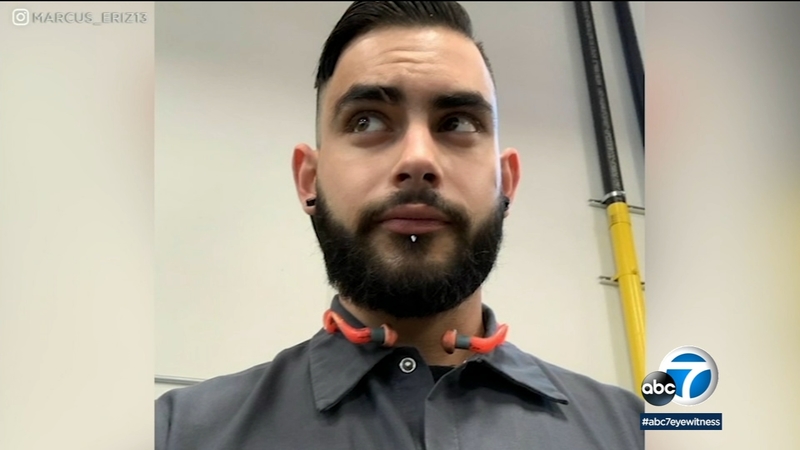 ORANGE, Calif. -- Officials held a news conference Monday following the announcement that two suspects were arrested in the death of Aiden Leos, the Orange County 6-year-old who was killed in a freeway shooting last month.

The suspects have been identified as Marcus Anthony Eriz, 24, and Wynne Lee, 23.

The more than two-week manhunt came to an end Sunday with the arrest of Eriz and Lee at their home in Costa Mesa, according to the California Highway Patrol, which said they are expected to be charged with murder. The suspects are being held on $1 million bail each.

Leos was rushed to Children's Hospital of Orange County, where he was pronounced dead.

Officials have released few details about the circumstances that led to the suspects' capture. But they have previously said a man and a woman were driving a white Volkswagen and it is believed the male passenger fired the shots that killed Aiden.

"I'm very, very confident that we have the right individuals in custody," said Orange County District Attorney Todd Spitzer. "The public should be very, very proud of what the law enforcement community did and the public did to come together to bring justice for this little boy. Aiden Leos died -- six years old. He had his whole life ahead of him. His parents should have been planning his kindergarten and his elementary school education. Not his funeral."

Leos will be buried Monday in a private ceremony.

"While these arrests will not ease the pain of a mother's loss, my hope is for the Leos family to have some peace of mind and to rest assured the CHP will work with the Orange County District Attorney to bring justice for Aiden," CHP Commissioner Amanda Ray said in a statement issued Sunday.

The CHP previously released a photo of the suspect vehicle, described as a white 2018 or 2019 Volkswagen Golf Sportswagen with non-tinted windows and a sunroof. Officials believe the woman was driving the vehicle and the male passenger, who fired the weapon, was sitting in the front seat.

A poignant memorial service was held Saturday afternoon for Aiden.

The service at Calvary Chapel Yorba Linda was not open to the public to attend but was livestreamed for viewing online.

"This a a memorial, not a funeral," Pastor Joshua Holiday said. "A funeral's a ceremony, it's held in connection with the burial or cremation, someone's death and it signifies the end of their existence. A memorial service is a ceremony serving to preserve the remembrance of someone's life. The focal point is different."

"We're here to celebrate the life of Aiden," he added.