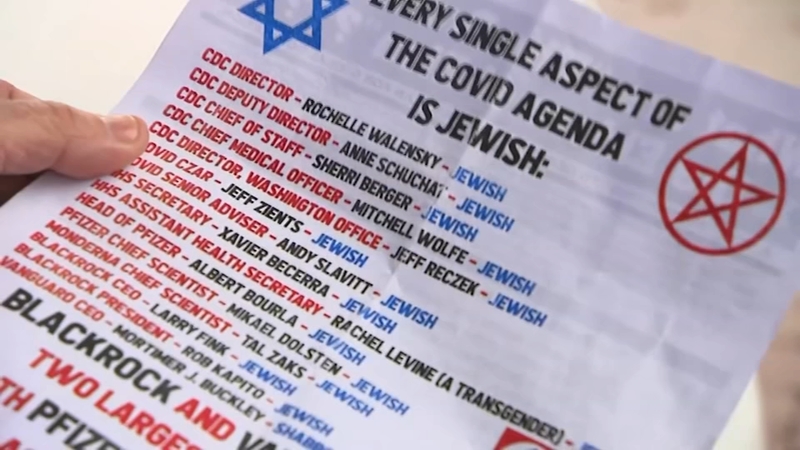 A pure dictionary definition is: "hostility to or prejudice against Jewish people." But the story is a lot more complicated than that.

"There is no one thing that is antisemitism," said Dr. Karen Auerbach, an associate professor of history at University of North Carolina-Chapel Hill. "There have been anti-Jewish ideas and sort of forms of systems of anti-Jewish thought that have changed over time with common themes, common tropes but with different political context and used in different ways."

While Auerbach says antisemitism functions like other forms of hatred in that it separates Jews as other, it is different in that Jews are presented as a nefarious group that seeks to control the economy, religion, health care systems, the media, and basically, the world.

"We know that we, the Jewish people, are often picked as the scapegoat when something's not going right amongst some group," said Rabbi Eric Solomon of Temple Beth Meyer in Raleigh, North Carolina.

Despite making up just 2% of the U.S. population and 0.2% of the world population, antisemites believe that Jews have an influence over politics, economics, capitalism, communism, the COVID-19 pandemic, and any number of other conflicts and current events.

Auerbach added what's hard to recognize about antisemitism is that it's often much less evident than other forms of hatred because these ideas have been around for so long by being part of the fabric of our very culture.

"It's very deeply rooted in Western culture and western civilization and therefore I think it's often difficult for people to identify, because there are so many assumptions in which these ideas about Jews are so deeply ingrained," Auerbach said.

Auerbach said these ideas go back to antiquity, but they really started to take shape in the Middle Ages when people started characterizing Jewish people as devilish figures. Then, in the 19th and 20th century, this idea of Jews as powerful elites really started to take hold especially with the publication of The Protocols of The Learned Elders of Zion in the early 1900s. This essay, which is still printed and widely circulated today, emphasizes that a cabal of Jews sought to control the world.

Modern manifestations of this antisemitism have already led to violence, including at synagogues in Pittsburgh and Poway, CA, along with a stabbing in New York around Chanukah last year. The most recent attack in Colleyville, Texas, meanwhile, was provoked by a terrorist who thought Jews had a direct line to the President and could free a prisoner.

According to the Anti-Defamation League, there were more than 500 antisemitic incidents reported to the ADL in 2021.

Another form of antisemitism has been on the rise during the COVID-19 pandemic: the trivialization, reversal or outright denial of the Holocaust.

"It just becomes a reference point to other forms of suffering rather than a historical development that involved the mass murder of 6 million people," Auerbach said. "I think that because it's so present in our culture and in public discussion, it sort of loses its impact or we lose our understanding of just what the Holocaust was."

Last week, attorney Robert F. Kennedy Jr. said during a protest against vaccine mandates, "Even in Hitler's Germany, you could cross the Alps into Switzerland. You could hide in an attic, like Anne Frank did."

"It's a history of great diversity of among cultures from place to place that have incorporated and been part of and transformed elements of surrounding cultures and societies in which they have lived," she said.

She also said she wishes more people listened to Jewish voices, particularly when they speak up about antisemtic incidents.

Rabbi Solomon, meanwhile, urges all people, whether Jewish or not, should speak up when they see antisemitic incidents.