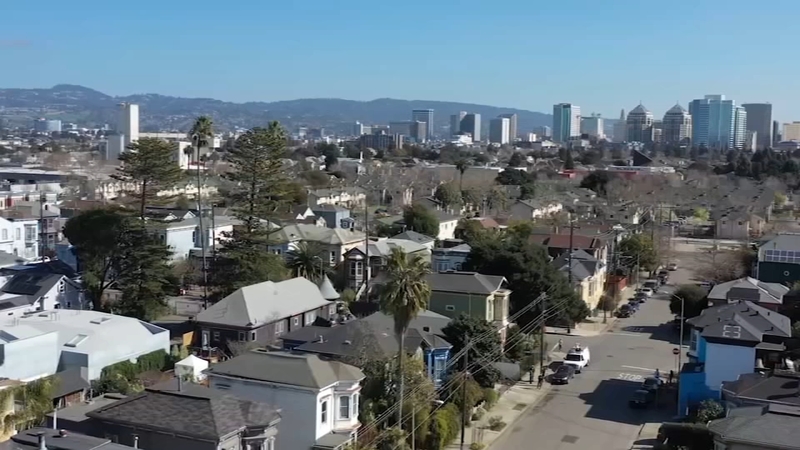 SAN FRANCISCO (KGO) -- A new report released Wednesday by the National Fair Housing Alliance is calling for sweeping reforms in the appraisal industry and highlights a lack of diversity in the field, among other challenges.

When you are looking to purchase a home or refinance your home mortgage the lending institution you're working with hires an appraiser to assure the home value is not less than the loan amount. Now, the profession of roughly 105,000 people is under scrutiny in this new report.

"We didn't expect to uncover some of the issues that we uncovered," said Lisa Rice, CEO of the National Fair Housing Alliance, a national civil rights organization focused on combating discrimination and securing equal access to housing.

The Appraisal Standards and Appraiser Criteria report released Wednesday is believed to be the most comprehensive review of bias in the appraisal industry to date, spanning 80 pages.

"There have been lots of anecdotes of appraisal bias," said Rice. "What our study shows is that these issues are not one-offs, that there are some really deep structural issues and barriers that no one family could overcome."

The Barnes family knew something was off after an appraisal on their West Oakland home came in at $750,000 flat. The family had a hunch because they've seen ABC7's on-going coverage of racially biased appraisals across the Bay Area.

The families believe their homes were undervalued by as much as $500,000 because of the color of their skin.

The report names two of those cases and highlights issues around oversight and governance of the appraisal industry, gaps in fair housing training, barriers to entry in the appraisal field, and a shocking lack of diversity in the field.

An ABC Data Team analysis of U.S. Census data confirmed those racial inequities in the appraisal industry showing that nationally an estimated 86% of appraisers are white, while only 61% of the U.S. population is white.

Those same racial inequities are present in the Bay Area. In San Francisco and the East Bay, white people make up 40% of the population, but an estimated 72% of appraisers.

The under representation gap is largest for the Hispanic/Latino community with 22% of the population, but only an estimated 7% of appraisers.

Asian American people are 26% of the population, but only estimated to account for 14% of appraisers.

For Black people it's 7% of the population but an estimated 4% of appraisers.

"That's borne out in the statistics that you see, not just from a race and ethnicity standpoint, but also from a gender standpoint. The majority of appraisers are male and white," said Jim Park, executive director of the Appraisal Subcommittee.

The ASC is the federal appraisal industry regulatory body that commissioned this independent report.

"When I first started appraising lots of appraisers would ask who in your family is an appraiser. Very quickly I learned that this is a tradition that's often passed down typically from father to son," said Jillian White, head of collateral at Better Mortgage - a technology forward home mortgage company.

As a Black woman, White is a rarity in the appraisal industry. She shared her experience of having to change her name to "Jay" on her resume just to land a job interview to be an appraiser trainee-a requirement to be licensed in the field.

"When I showed up for a job interview, things changed. All of his enthusiasm was gone and instead of conducting an interview, he just kept telling me 'You're overqualified,' and 'I don't know why you want to become an appraiser.' The interview was very short because he never even invited me to sit," she said.

NFHA's report out today suggests re-examining barriers to becoming an appraiser that keep women and people of color from entering the industry like the college degree requirement, education hours and experience hours to obtain a license that take anywhere from dozens - to hundreds of hours working under a supervisory appraiser.

"That presents a very unique barrier for people of color, first of all, who don't already know an appraiser who would take them under their wings," said Rice.

The Appraisal Institute, the largest association of real estate appraisers in the country, provided the following statement:

"The report acknowledges that enhanced standards and greater diversity within the profession are critical elements in addressing equity and rooting out bias in appraisal - we agree. That's why since 2018, the Appraisal Institute has worked to recruit and expand opportunities for appraisers of color and women through the Appraiser Diversity Initiative, raised ethical standards for our membership, convened researchers and experts, worked closely with congressional leaders, and advanced legislation to require education on antidiscrimination and fair housing. There is more to do, and these efforts remain core to our work as an organization."
-Jody Bishop, MAI, SRA, AI-GRS, Appraisal Institute President

According to the Appraisal Institute, it is working on an initiative to diversify the industry by teaming up with Government-Sponsored Enterprises that handle mortgages like Fannie Mae and Freddie Mac, and the National Urban League.

Since 2018 the AI says it has awarded 113 scholarships. Fifteen recipients have completed the program and another 84 recipients are still training.

An Oakland homeowner almost lost out on more than $400,000 in equity thanks to an appraisal she thought was too low.

While this represents progress, it is only a dent in the industry of 105,000 U.S. appraisers that has been under scrutiny as families of color file federal lawsuits and HUD complaints in response to alleged lowball appraisals.

However, major changes to how the industry operates could come in a matter of weeks.

The Property Appraisal and Valuation Equity (PAVE) interagency task force created by President Biden and led by Housing and Urban Development Secretary Marcia Fudge and Domestic Policy Advisor Susan Rice is expected to release a major report soon identifying root causes and solutions to the misevaluation and undervaluation of properties owned by families of color.

"Secretary Fudge and Ambassador Rice and recognize that each of us has a role to play to ensure all Americans have opportunities to build generational wealth through how their homes are valued. This is especially important in communities of color, and why the President launched a first-of-its-kind Task Force aimed squarely at delivering a set of concrete actions that the Federal government will take to redress appraisal bias. HUD and its partners are proud to continue to engage appraisers, lenders, philanthropy, civil rights groups, and victims of appraisal bias through the Task Force. We applaud partners like NFHA for taking up the mantle to reveal and address bias and inequities, and look forward to reviewing the contents of NFHA's study as HUD finalizes its report to the President."

"We have to have a full throttle response from Congress, from regulators, from the industry, from civil rights groups, in order to address these issues," said Rice.

Other charges from the report include calling on the Appraisal Standards Board to revise the code of ethics for appraisers known as the Uniform Standards of Professional Appraisal Practice to clearly state that discrimination in appraisals is prohibited.

NHFA is also calling for reform to the Reconsideration of Value Process where homeowners and lenders flag a potentially erroneous appraisal value and have it reconsidered. The civil rights group suggests the Appraisal Foundation, government entities, GSEs, and lenders should develop standards and guidance for appraisers to make the process more fair, transparent, and increase accountability.

According to the NFHA, more than 4 million acts of housing discrimination happen each year in the U.S., but less than 1% are reported.

If you believe you have been the victim of housing discrimination, file a complaint by visiting the National Fair Housing Alliance website.