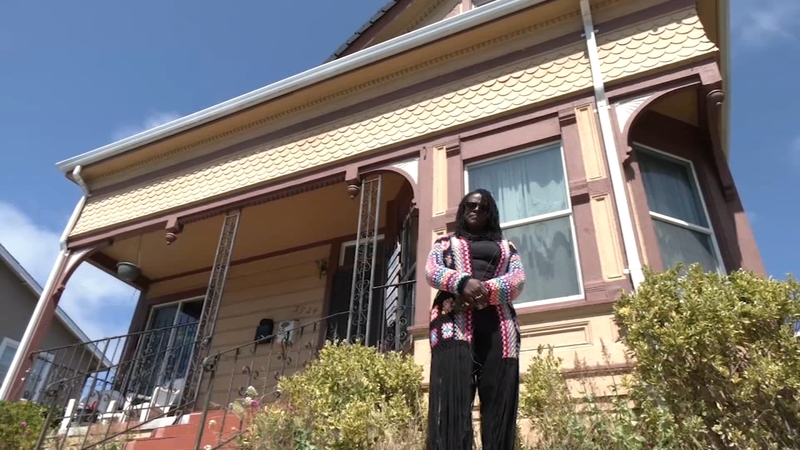 OAKLAND, Calif. (KGO) -- ABC7 News continues to lead the charge in looking at possible discrimination in the home appraisal process.

An Oakland homeowner almost lost out on more than $400,000 in equity thanks to an appraisal she thought was too low.

Oakland native Cora Robinson asked the tough questions, challenged that appraisal, and now the Department of Housing and Urban Development is investigating.

According to the complaint Robinson filed with HUD it all came down to the comparable homes selected in the report and where they are located.

Robinson's family has owned the duplex at 59th Street and Martin Luther King Jr. Way since 1959.

Robinson's grandmother and uncle purchased the property, then passed it down to her mom, and now Robinson is the owner.

She planned to retire this May and wanted to prepare herself to live on a fixed income. For her that included refinancing the adjustable-rate mortgage she took out on the home in 2008 in the shadow of the housing market crash.

Robinson started working with a lender which ordered an appraisal in August 2020.

Glover: "What was your initial reaction when you got that appraisal for $800,000?"

Robinson: "It confused the loan agent. So that was really the red flag."

That $800,000 dollar appraised value was half a million dollars less than the home's estimated worth on Zillow at the time of $1.3 million.

She followed the proper channels and requested a reconsideration of value; taking issue with the comparable homes selected in the report.

"All the comps he used were within 10 blocks of each other and they're all like 30 blocks from me," said Robinson.

Half of the six comparable homes listed on the report were more than a mile away from her property, which she pointed out in a request for reconsideration of value.

However, the appraiser rejected the request.

The loan was denied, and her loan agent suggested she wait three months and reapply.

"That's a long time to wait, because someone's opinion of value is so low," said Robinson.

She waited until October 2020 and applied for a new loan with a different lender.

According to the complaint Robinson filed with HUD, the same appraisal management company was used by the lender.

She claims a different appraiser surveyed her property, but never submitted his report to the lender.

An Oakland homeowner's house was appraised for $150,000 more after he had a white-passing friend stand in for him after a low appraisal.

After back and forth with the company a new appraiser was assigned: the same person who appraised the home in August.

"My heart dropped. Really? How does this happen?" asked Robinson.

The odds of the same appraiser being assigned by an appraisal management company (AMC) to survey the same home within just months are slim.

According to the HUD complaint, the appraiser never came back out to survey the property and never contacted Robinson.

ABC7 News reached out to the appraiser by phone, who said the AMC only asked him to conduct a drive by appraisal and said in part:

"I appraise property, not people. I've been doing this a long time and don't have any ill feelings towards anyone. Location, size, condition: that's what I've appraised."

It also shows six out of seven of the comparable homes the appraiser selected were more than a mile away from Robinson's home, three of them a mile and a half or more away and farther south--an area with a history of redlining that has more Black residents and historically lower home values.

"When we first saw all of the different comps that had been used for her property (we knew) something very strange had been going on," said Caroline Peattie, the executive director of the Fair Housing Advocates of Northern California (FHANC).

"I can't think of another reason why you would refuse to choose a fair representation of homes that are closer to the home that's being appraised. I don't think he would have done that had he not known Robinson's race," said Peattie.

Robinson said she was home for the appraisal--proudly displaying family pictures and a Black pride flag in her front window.

She decided not to take the advice she read online to take down personal effects and essentially whitewash her home.

But she says she also didn't do that for her third and final appraisal when she applied for a new loan with a different lender in February 2021.

This time she was assigned a different appraiser.

Glover: "What was your reaction to that? That's a more than 50% increase from the original appraised value."

Robinson: "I could just breathe, I was so relieved."

The final appraisal pulled comps just blocks away from Robinson's home and in each direction.

Documents obtained by ABC7 News show HUD is investigating the lending institutions, the appraiser, and the appraisal management company used in the first two contested appraisals for potential violations of the 1968 Civil Rights Act and the Fair Housing Act of 1988.

Cabrera provided the following statement on behalf of HUD:

"Fair housing is not an option, it's the law, and HUD takes these and all allegations of unlawful discrimination seriously. If you feel that you have been discriminated against in housing based on your race, color, national origin, religion, sex, familial status, or disability, contact HUD at 1-800-669-9777 or online at www.hud.gov/fairhousing."

With her refinances now complete, Robinson is saving close to $800 a month on her mortgage.

FHANC points out the six month delay in closing on the refinance cost Robinson $4,000 she could have saved by closing before interest rates drifted up.

That amounts to several more thousand dollars she could have saved over the life of the loan by locking in a lower rate sooner.

Inside Robinson's Oakland home she walks over to a picture of her granddaughter and late mother, thanking her mother for the strength to fight for what's hers.

She also said she's hopeful her granddaughter will enjoy the fruits of that labor.

"This is a legacy for her," Robinson said. "We want to leave her something and make her proud of her family."

If you are going through a refinance and feel like you've been hit with a low appraisal it's your right to challenge the report after you've reviewed it and ask the lender for a reconsideration of value.

If you feel you were treated unfairly by an appraiser, you also can file a complaint with state and federal agencies.

Here's the website to file a complaint with the California Bureau of Real Estate Appraisers.

Here's the website to file a complaint with the Department of Housing and Urban Development.

You have one year following the incident to file a complaint with HUD.

You have two years after the incident to file a lawsuit.