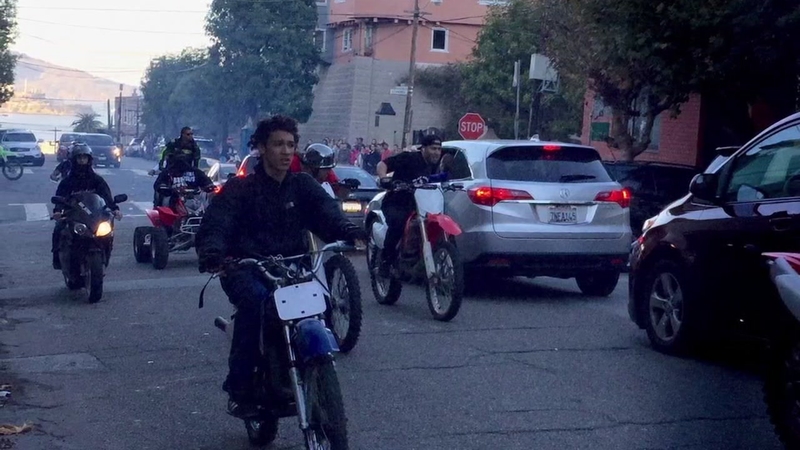 SAN FRANCISCO (KGO) -- Along with the traffic and tourists, large groups of dirt bikes and motorcycles, frequently tear through Russian Hill. One neighbor took cell phone video this month of a group of dozens of bikers idling and burning out their tires after driving down the crooked street.

Much of this activity is illegal and the neighbors are fed up.

"They're fast, they're loud and they ride in packs," said Russian Hill resident Ian Olson, who added, "They're worse than the tourists that drive up here and create a lot of traffic. They're more dangerous, they drive on the wrong side of the road and something needs to be done about it."

Anne Brubaker is doing something about it - she's been documenting the bikers for years and giving the photo evidence to police. She took photos in 2016 of group riding on ATVs and dirt bikes on the sidewalks. And this month, she got shots of bikers popping wheelies, near her home on Leavenworth at the bottom of Lombard Street on a busy holiday weekend.

"They swear at me and try to grab my phone and knock it to the ground and whack at me," said Brubaker of her attempt to photograph the bikers in 2016.

Brubaker also says her neighbors with children say they get dangerously close.

"You know they have little regard for human life and it's frightening."

"I think if we have more traffic cops, which are motorcycle cops on our streets, which I think we need to increase the number of them, we definitely can tackle this issue."

The large groups of bikers are not just a San Francisco problem. ABC7 has reported on this issue for years throughout the Bay Area. It is illegal in California for unlicensed dirt bikes to ride on city streets. Wheelies, burnouts and exhibitionist speed are also illegal.