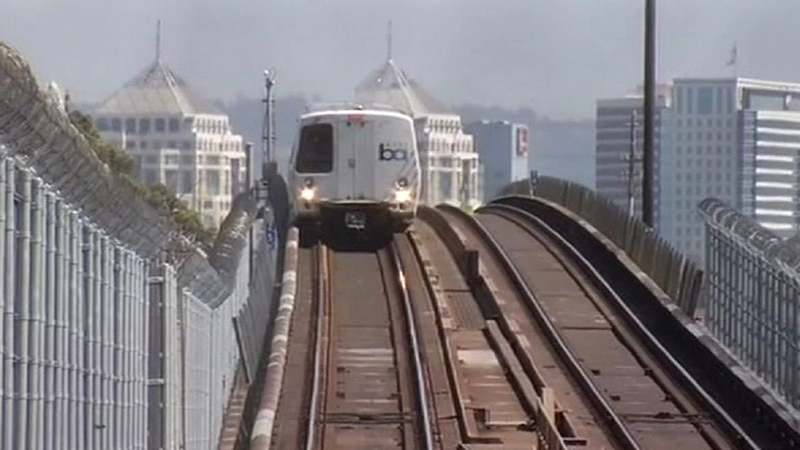 OAKLAND, Calif. (KGO) -- If your weekend plans include getting from one side of the Bay to the other by taking BART you may want to figure out other means of transportation since the Transbay Tube will be shutdown this weekend.

About 100,000 people ride BART on any given weekend day, so this closure is going to impact many people who won't be able to take BART from the East Bay to San Francisco. However, BART officials say it's all for a very good reason.

BART service will be shut down between West Oakland to Embarcadero all day Saturday and Sunday. "We are replacing a critical component of our tracks and it's really in the most important area of our entire system right outside the Transbay Tube," BART Spokesperson Alicia Trost said.

The goal is to make the overall ride smoother and faster, something BART riders can't argue with. "It's kind of a necessary evil sometimes to have BART closure, but if it makes things better all the better," San Francisco resident Josh Johnson said.

BART has been trying to alert riders of the major closure. Commuters in the Bay Area are also bracing for the weekend traffic jams. At least 20,000 more drivers will be on the Bay Bridge because of the closure.

Those who have to come to the city are planning ahead. "I can't avoid coming to the city. I have to work Saturday so, I have to leave the house a lot earlier," BART rider Julian MacDonald said.

A Taxi driver named Hakim Ahmed is one of the few people who look back fondly at the traffic mess created by the BART strike and he's looking forward to this weekend when BART closes the Transbay Tube. "Business was good, traffic was bad," he said.

The Transbay Tube closure is expected to create headaches for the tens of thousands of people who normally use it on a weekend day. There will be disruptions that even a planned bus bridge won't fix. "BART is advising the bus bridge is a lifeline service only, so don't depend on that for your trip to San Francisco. It will delay your trip by an average of one to two hours extra from what it normally takes on the Transbay," CHP spokesperson Daniel Hill

For those who don't have a car and really need to get to the city, there will be a lifeline bus at 19th Street in Oakland. However, people can expect up to about a two-hour delays due to traffic.

Transportation officials say the best option may be to stay close to home. "We are really encouraging if you don't need to get anywhere to stay local. Don't try to get across the bridge," Trost said.