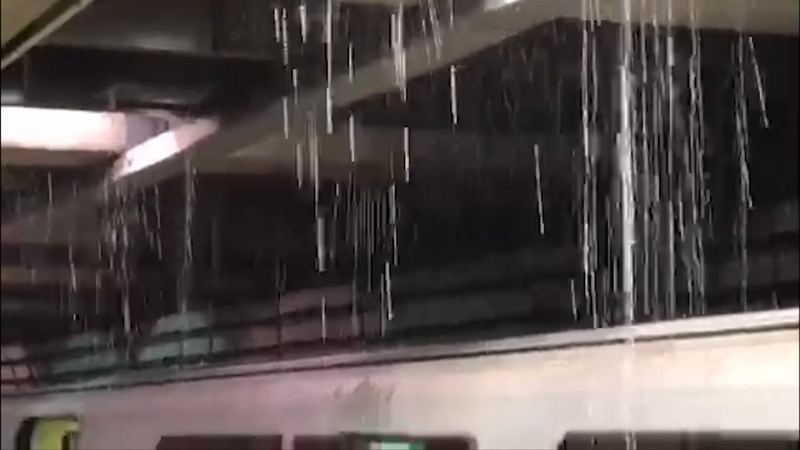 Leak sends water pouring out of ceiling at BART station

SAN FRANCISCO (KGO) -- Muni employees greeted Muni passengers at the Embarcadero station with this message during Thursday morning: "If you are going to ride Muni, take BART all the way back to Montgomery Station. You get a free ride on BART!"

"I am worried. How am I going to get to work! I don't want to be late!" says one Muni passenger, who admits that it doesn't help that she is new to using the Muni system.

The problem facing commuters was the gallons of water overflowing from the Embarcadero Muni station onto the BART platform below.

"We were able to get the water out between 5 and 6 this morning. There may have been some residual water that drained down onto the BART station," explains Paul Rose, a spokesperson with SFMTA.

"My understanding is that there was significant flooding on the trackway and on the station area where passengers would normally stand. And because of that we had stopped service in the area," says Rose.

Clean up crews spent the morning sweeping water off the BART platform, as passengers navigated through the puddle and buckets of waters.

"I have lived here for such a long time, that you just roll with it," says Joe Tate who lives in Berkeley. "But with any transit system, there is always going to be a break down, so you just deal with it!"

BART says the Muni pipe has now been capped. The Muni station reopened around 3:30 p.m.

Muni is offering free BART rides for Muni passengers from the Embarcadero to Montgomery until the station reopens.

UPDATE: #SFMuni trains are now resuming regular #subwaysvc
at Embarcadero Station. Our work crews completed repairs & tested the
system. We thank you for your patience. https://t.co/Ein1zGS7zM

UPDATE: As of 3:15 pm @sfmta_muni at the Embarcadero was still closed. pic.twitter.com/HDF2UkpkQt

Before and after pictures of that drainage pipe that began leaking water at the Embarcadero station early this morning. The pix on the right is the same pipe repaired. @sfmta_muni tells me they had TWO leaks. Leaks ended up also affecting @SFBART. pic.twitter.com/ulYlFqUm0E

#TRAFFIC: #Muni trains not stopping at Embarcadero #station this morning. No ETA for when service will be restored. DETAILS: https://t.co/c8i4B3a1Qf#SanFrancisco #SFBART #morningCommute #BayArea pic.twitter.com/X8UudFaTyh

Some type of drainage issue at BART Embarcadero Station. Video from a co-worker, waiting for more info from @SFBART. pic.twitter.com/UY4pQb0zgf