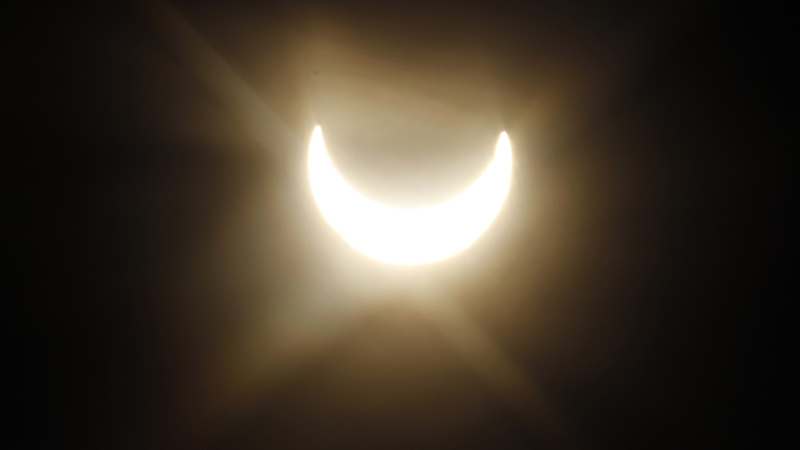 SAN FRANCISCO (KGO) -- Starting at 9 a.m. on Aug. 21, the shadow of the moon will sweep across the United States at more than 1,000 miles per hour. Millions of people from around the world are planning trips within a 70 mile wide path, from Oregon to South Carolina, to witness a total eclipse of the sun. This is the first coast-to-coast solar eclipse in the U.S. since 1918.

"In a total solar eclipse, the moon actually completely blocks out the light of the sun," explains Rob Semper, a physicist and associate executive director at San Francisco's Exploratorium.

He and a team from the Exploratorium will be travelling to the path of totality, in Casper, Wyoming, to broadcast the eclipse. Semper says that while seeing a total eclipse is rare and impressive, a partial 76 percent eclipse can be seen in the Bay Area, peaking around 10:15 a.m..

"It will get quite dim," he said. "It will be kind of spooky, kind of like twilight, but not exactly like twilight. The color is not the same as twilight color."

For the best eclipse viewing, be it full or partial, find a cloudless location and look up. And keep in mind that it is never safe to look directly at the sun. Special solar eclipse shades are widely available. NASA recommends using glasses or shades from American manufacturers including American Paper Optics, Rainbow Symphony, Thousand Oaks Optical or TSE17. When you put on the shades, you should be able to see nothing but the sun, which will look orange.

RELATED: Why are solar eclipses so rare?

Robyn Higdon is the director of museum experience at the Exploratorium and she recommends viewing the eclipse with a crowd of people.

"It's a very social experience," she said. "It makes you feel good when you see totality."

VIDEO: Here's what a solar eclipse looks like from space

Higdon has been planning the Exploratorium team's trip to the eclipse in Oregon and Wyoming for two years and found camping spaces and house rentals.

"At this point, most hotels are booked solid, most campgrounds are filled,"she said. "But there are exceptions and I think if you're really diligent online, there are some places, like if you search Oregon eclipse camping, where you can find some eclipse campsites."

According to Higdon, it may be easier to find lodging and camping in Idaho and Wyoming.

ABC7 made a call to the City of Madras, Oregon, which said they do have some camping spots available during the eclipse.

Higdon and Semper say the roads to locations within the totality zone will be packed with traffic the morning of the eclipse. They recommend planning ahead and waking up early if you plan to drive into one of these locations.