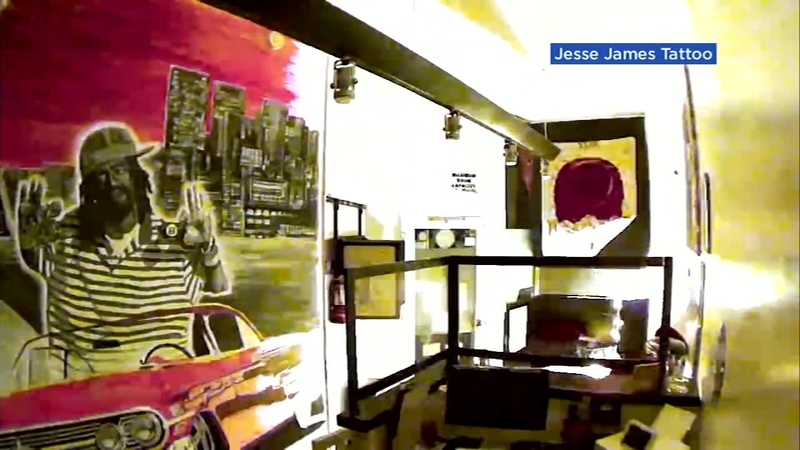 BERKELEY, Calif. (KGO) -- Two weeks before they were scheduled to reopen, someone threw a Molotov cocktail through the window of a tattoo shop in Berkeley.

Who did it and why remains a mystery.

Owner James Jesse said the fire was started early in the morning on March 18.

RELATED: EXCLUSIVE: 2 Asian seniors believe they were targeted after car fires in Oakland

Surveillance video from inside the shop shows the front window being smashed and the Molotov cocktail thrown inside Jesse James Tattoo.

"I just wanted to make sure no one got hurt," said Jesse about getting the call.

The shop on the 1800 block of Euclid Avenue in Berkeley has two stories of apartments above, though no one was injured.

The inside of the shop suffered serious damage.

James said they canceled their insurance last year after they were forced to shut down in November due to the pandemic.

"There wasn't enough money to pay rent. We didn't think we needed insurance if nobody is doing anything because we were shut down," he said, unsure how he will make up the losses.

He had been planning on finally opening back up on Wednesday, March 31, but those plans are indefinitely on hold as he figures out what to do next.

He said he has many theories about why they may have been targeted, but admits they won't know for sure until someone is caught.

"We don't have enemies," he said. "We are all still wondering who did it."

A GoFundMe has been set up to raise money for repairs.

ABC7 has contacted the Berkeley Police Department for more information.