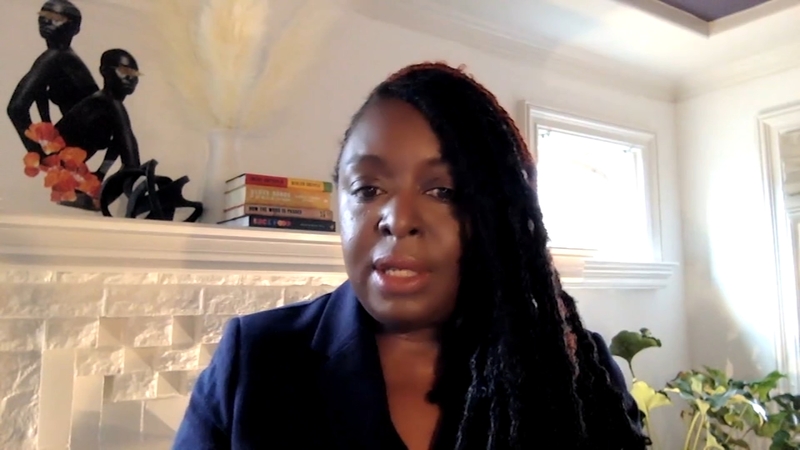 EXCLUSIVE: 'I'll be vindicated' | Inside the Black Girls Code turmoil

"I certainly did not anticipate being in the position to have this conversation with you," said Bryant.

"I'm unclear about why this action was taken by the board, and I'm really disappointed," she added.

According to an e-mail forward to ABC7 News, Bryant was informed of her suspension on Dec. 21, 2021 after the nonprofit's board of directors was made aware of "serious allegations."

Shortly after, Bryant tweeted "so it's 3 days before Christmas and you wake up to discover the organization YOU created and built from the ground up has been taken away by a rogue board with no notification."

Press release: so it’s 3 days before Christmas and you wake up to discover the organization YOU created and built from the ground up has been taken away by a rogue board with no notification. VC: @BlackGirlsCode

In her interview, Bryant called the timing of the suspension "very unfortunate. And somewhat cruel."

Black Girls Code has provided mentorship and taught tens of thousands of Black girls across the world how to code in the decade since its founding, in an effort to close the gender gap in tech.

Black Girls CODE introduces girls from underrepresented communities to the field of technology and gives them the skills to become innovators of tomorrow.

Glover: "Do you think that an investigation into the allegations that have surfaced is warranted?"

Bryant: "If there are issues that have surfaced or brought up by anyone on the organizational team, myself included, we owe it to our community and the girls, the little Black girls that we serve, to fully investigate those issues.

The Black Girls Code Special Committee of the Board of Directors sent the following statement to ABC7 News:

"First and foremost, the Special Committee and the entire Board are committed to their fiduciary duties to Black Girls CODE and to our incredible community - including our supporters, partners, and dedicated staff. Earlier this year, the Board received or became aware of concerns raised by current and former employees about Ms. Bryant's conduct. On October 5, the Board formed the Special Committee to review and evaluate the complaints and determine what, if any, action should be taken with respect to these concerns. To ensure a full and fair review process, earlier this week, the Special Committee placed Ms. Bryant on paid administrative leave. Ms. Bryant remains employed and will be paid in full during her leave. We have appointed an interim executive director to serve while this process is ongoing. Because this is an ongoing review and because of our respect for the privacy of Ms. Bryant and all others involved, we do not intend to make further public comments until the review has been completed."

Glover: "What do you hope this investigation finds?"

The Board of Directors declined to expand on the allegations mounted against the CEO, but the Silicon Valley based tech outlet, "Tech Crunch," reportedly spoke to several former BGC employees anonymously, who describe Bryant's leadership style as "rooted in fear" and instances when managers were "publicly berated."

Anonymous reviews on Glass Door describe a "toxic work environment for Black women" where the "CEO continues to be the problem".

Glover: "Is this criticism true?"

Bryant: "I'm not here to say that our organization is a perfect place. But I'm saying that the efforts that we have invested in... is what is going to make us a great place to work in the future."

Bryant said those investments include hiring consultants to work with the leadership team, launching a cultural survey to get to the bottom of high turnover during the pandemic, and bringing in an external firm for a compensation review.

"I absolutely support an investigation because I feel that I will be fully, fully vindicated, there's not anything that I've done that has been wrong. I don't see a way that I wouldn't be a part of Black Girls Code in some way in the future," Bryant said.

The board did not specify the timeline of the investigation.

Bryant, formerly an engineering manager for both pharmaceutical and biotech companies, launched Black Girls CODE in 2011 in order to bridge the digital divide for girls of color.

She recalls feeling culturally isolated as she entered the tech industry nearly three decades ago, with few classmates and coworkers who looked like her.

Since its founding a decade ago, Black Girls CODE has expanded to a number of cities across the country.

Bryant has received numerous awards for her efforts that have reached thousands of young women ages 7 to 17 across the country.