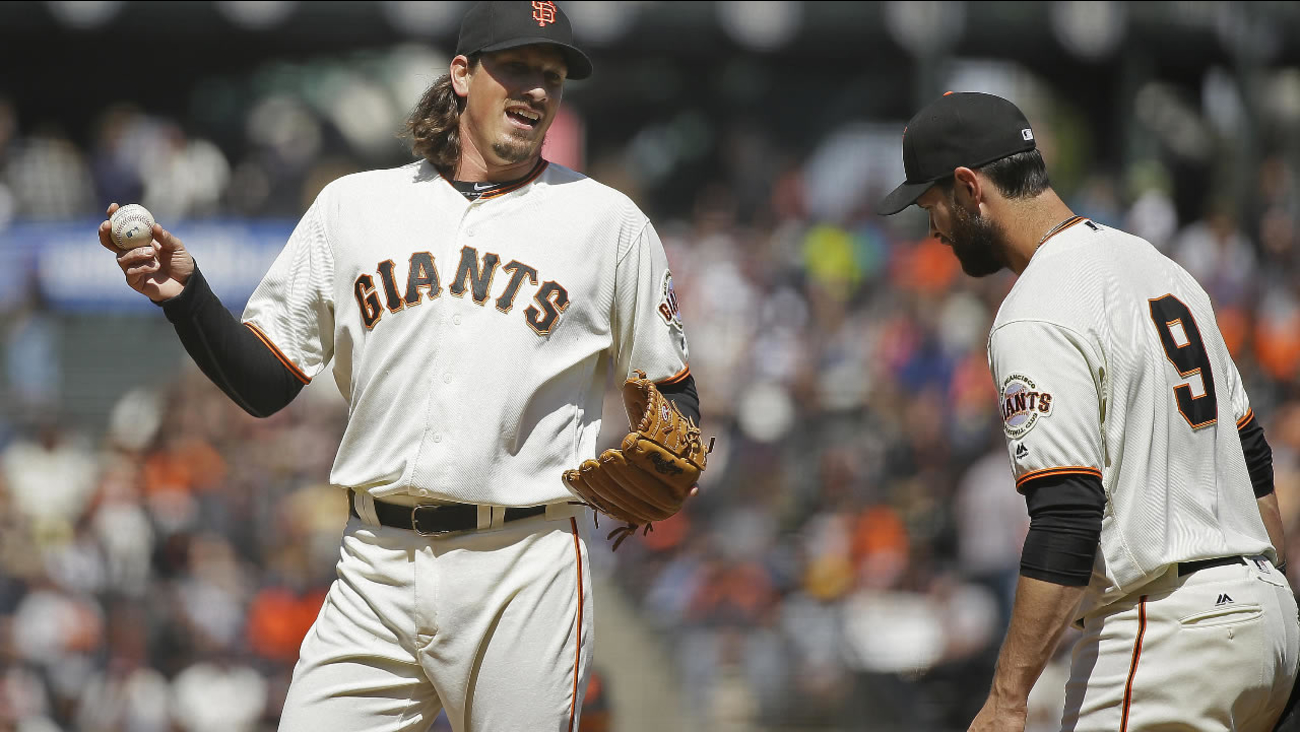 Giants' Jeff Samardzija laughs with Brandon Belt during a baseball game against the Padres in San Francisco on Wednesday, April 27, 2016. (AP Photo/Eric Risberg)

SAN FRANCISCO -- Brandon Belt was a homer short of the cycle and drove in five runs, Hunter Pence drove in a pair on three hits and the San Francisco Giants completed a three-game sweep by beating the San Diego Padres 13-9 on Wednesday.

Jeff Samardzija (3-1) went 5 2/3 innings and snapped a tie with a two-run single for the Giants, who won their fifth in six games.

Joe Panik, Brandon Crawford, Trevor Brown and Gregor Blanco also drove in runs for the Giants, who reached a season high in runs. Pence and Matt Duffy each had three hits.

Samardzija won despite allowing a season-high five runs on five hits. He walked two and struck out a season-best seven.

Padres starter Andrew Cashner (1-2) couldn't get out of the third inning, giving up six runs - three earned - on four hits over 2 2/3 innings. He walked four and struck out a pair.

Wil Myers hit a three-run homer and extended his hitting streak to 12 games to match a career high. Matt Kemp homered and drove in two runs for the Padres, who lost their fifth straight. Kemp had 10 RBIs in his first five games but just three over his previous 15.

Adam Rosales also hit one out, Jemile Weeks tripled in a run and Brett Wallace had a run-scoring double. Alexei Ramirez added a pair of hits.

Cashner, who also drove in a run, turned in his shortest outing since a two-inning stint at the Washington Nationals on July 5, 2013, and the Padres lost for the 12th time in their past 14 games in San Francisco.