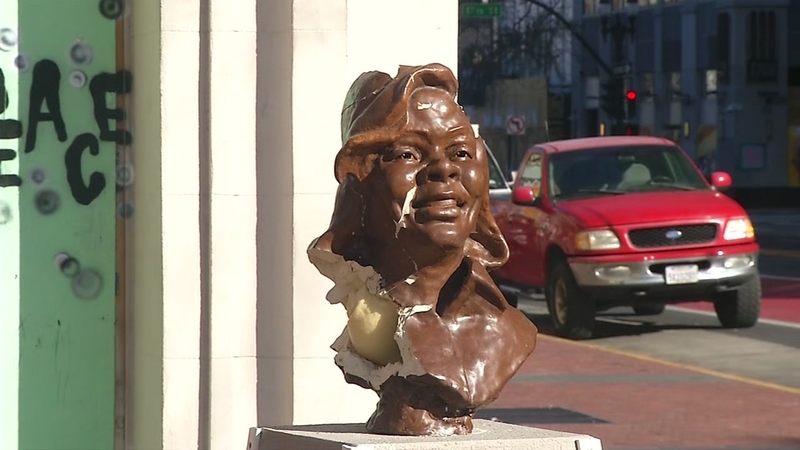 OAKLAND, Calif. (KGO) -- The Breonna Taylor sculpture that was vandalized over the weekend in Oakland has now gone missing.

The artist, Leo Carson, told ABC7 News that the bust was stolen and that he has no leads yet on who took it. Carson plans to hold a press conference on Tuesday afternoon in downtown Oakland where members of the Black Lives Matter movement will fill the base of the sculpture with concrete.

Carson first installed the ceramic bust of Taylor in Latham Square earlier this month along with the phrase, "Say Her Name Breonna Taylor." It was vandalized over the weekend and a GoFundMe account was started to help Carson with the costs of repairing it. He planned to cast the repaired bust in bronze.

The #BreonnaTaylor sculpture in Oakland that was vandalized over the weekend has now been STOLEN. The artist Leo Carson says there are no leads yet for who took it.

I’m here in Latham Square right now and, yep, it’s gone. Only the base remains. pic.twitter.com/cOUWu2NDQy

A spokesperson with the Oakland Police Department tells ABC7 News that officers are investigating the theft and vandalism.

In an interview with ABC7 before the disappearance, Carson said the vandalism felt like an attack on Taylor and the Black Lives Matter movement.

RELATED: Hundreds turn out for Breonna Taylor protests, rallies throughout the Bay Area

"At first I was stunned and shocked and hurt and angry," Carson said. "Just a whole flood of emotions. It felt like I was personally attacked and also they attacked Breonna Taylor and the BLM movement."

Carson, who lost his job as a server during the pandemic spent months participating in protests supporting the Black Lives Matter movement. And felt compelled to do more after Taylor's death at the hands of White police officers in Louisville.

"I was able to take that time and practice and training I have as an artist and put that into service of something much bigger than myself that's happening," Carson added.

Disappointing to see the #BreonnaTaylor statue in downtown Oakland vandalized. It was installed just 2 weeks ago. @oaklandpoliceca are aware & are investigating. pic.twitter.com/0rNPiPLTSI