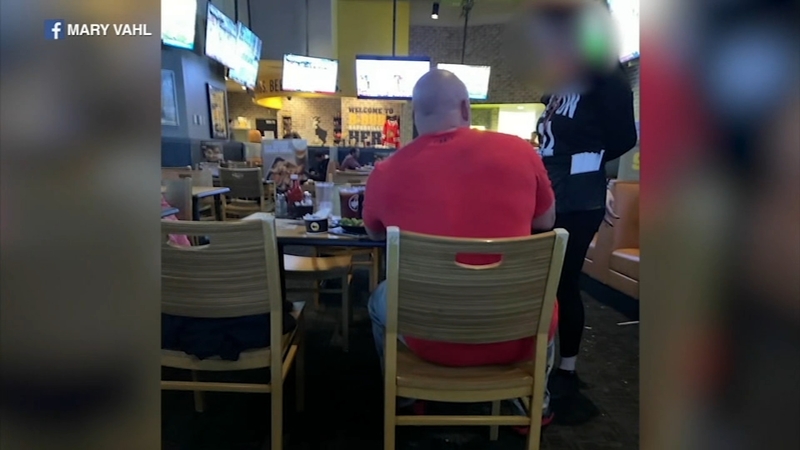 NAPERVILLE, Ill. -- A manager and supervisor at a Buffalo Wild Wings in Naperville, Illinois have been fired for an alleged incident of racism against a group of black customers.

The customers said their group was asked to move because another customer did not want to sit by black people. The racist incident reportedly happened at the Buffalo Wild Wings on 75th Street, east of Route 59.

Back in October, a group of about 15 customers celebrating a birthday party said they were asked to move to another table because of their skin color. In the Facebook post, the group was described as having adults and children of multiple ethnicities.

Once seated, Justin Vahl said the group of adults and kids were then asked to move tables because a customer sitting nearby, a middle-aged white man, said he did not want to sit near black people.

Vahl, of nearby Montgomery, said he's multiracial. His wife, Mary, first shared the story on social media. After several managers tried to move the group, they left for another restaurant and alerted upper management.

"I think that if you don't like someone sitting next to you, no matter if they are purple, move. You move. You'll be the one to move. If you don't like it, that's the way I feel about it," said Daphne Smith, Naperville resident and Buffalo Wild Wings customer.

"It's kind of old-fashioned in terms of race and race-relations in Naperville," said Jessica Black, Naperville resident and Buffalo Wild Wings customer.

Buffalo Wild Wings said they fired a service manager and a shift manager as a result of the incident. In a statement, the company said, "We take this incident very seriously and after conducting a thorough, internal investigation have terminated the employees involved, Buffalo Wild Wings values an inclusive environment and has zero tolerance for discrimination of any kind."

Naperville Mayor Steve Chirico says the alleged behavior that took place in his city is unacceptable.

"I think that it would be naive to think that it does not happen," Mayor Chirico said. "We know that people are out there with racist views and it is unfortunate."

Mayor Chirico said the restaurant made the right move in firing the employees. He knows Naperville can do better.

"That is unacceptable to not have someone in there who is trained and understands how to treat people properly," he said.

"I know for a fact that right now they are dealing with a lot of harassing phone calls," said customer Laura Grimes. "And I think they are all hard-working people and I don't think it should affect the rest in there, it is a good restaurant and generally good employees."

"We as a country, I think we really need to heal," Mayor Chirico said. "I think we need to come back together."

Buffalo Wild Wings said the customer who made the complaint has been permanently banned from every Buffalo Wild Wings location nationwide. The company will also hold additional sensitivity and diversity training at all of their Chicagoland locations.

The customer who made the complaint is in contact with his legal team.

The DuPage NAACP will also look into the incident.