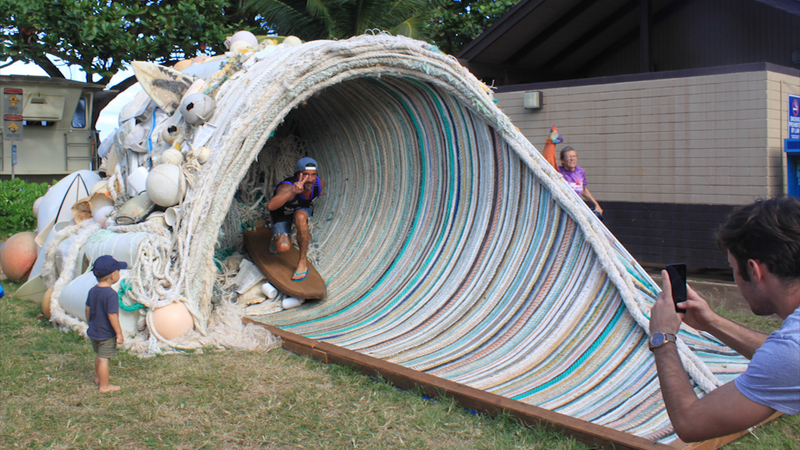 SANTA CRUZ, Calif. (KGO) -- Millions of pounds of trash is dumped in our oceans each year causing natural dangers to the seas and ocean life.

Santa Cruz Ocean artist and scientist, Ethan Estess, is looking to change that by taking what washes up on the beach and turning it into art.

This artwork is used to raise awareness of this global problem to hopefully try and fix it in the future.

"I work with trash collected from the ocean to tell stories of how to protect it," Estess said.

Estess uses all sorts of different forms of garbage that he cleans out of the ocean to create elaborate art projects.

He turns trash into treasure to Build a Better Bay Area.

"I think the beauty of using marine debris and ocean trash to create artwork is that you can tell stories in a very visual way," Estess said. "Instead of depressing statistics, you can inspire people to make change in your own life."

One of the changes he suggests is getting rid of plastics from your daily routine.

"Single-use plastics will be used for 10 seconds and they will last 500 years," Estess said. "I want people to think about our environmental behaviors and how we can improve them."

Estess built surfboards while growing up.

When he attended Stanford University, he realized he couldn't use these skills to gain a degree.

So he worked for an art degree to continue his passion for creation and conservation.

From a fishing gear wave in Hawaii, to a whale tail in San Francisco.

Now, a wave of golf balls.

"It's an 8-foot tall, 30-foot wide barreling wave," Estess said. "It's going to be made from a steel foundation and will be covered in 20,000 golf balls collected out of the ocean by a local high school student."

Alex Weber and her friends, including Toby and Nevin Ketchum, collected more than 50,000 golf balls from the coast that surrounds the world-famous Pebble Beach Golf Course.

"If you were to go diving or snorkeling in the kelp forests that surround Pebble Beach, it's hard not to notice the thousands of golf balls that scatter the sea floor," Nevin Ketchum said. "Our good friend, Alex Weber, decided to do something about this. So she picked up 50,000 golf balls off the ocean floor at Pebble Beach."

The Carmel coast has been part of Weber's life since she could walk.

When she looked into the waters, that she has so much love for, and saw so much trash, she knew she had to do something about it.

Now, Estess has taken her clean-up project to turn it into art.

Every project has its own story and message.

But each one all has the same goal.

"We're lucky to live in the Monterey Bay National Marine Sanctuary. It's a really well-managed and beautiful piece of ocean that is spectacular. Part of my role as an artist is to communicate why we need to protect that important habitat."

Estess works year-round to continue to clean up the oceans in the area.

He does what he does for the environment and the ocean to Build a Better Bay Area.

"My goal is to educate the population that we have here about the beauty of our ocean and the need to protect it," Estess said. "Here in the Bay Area we have a responsibility. We have one of the best managed piece of oceans in the world. We need to keep leading into the future by showing people around the world what sustainable ocean management looks like. The beauty of art is that it can draw attention to those issues and inspire people to make change."

Stay up to date on the latest projects from Ethan Estess on his website and donate to help his efforts for ocean conservation by checking out his GoFundMe page.