AP
SUNNYVALE, Calif. -- Signaling her reign has reached a pivotal juncture, Yahoo CEO Marissa Mayer is trying to convince restless shareholders that the long-struggling Internet company is heading in the right direction.

Starboard contends that since Mayer became CEO in July 2012, Yahoo has been wasting money on ill-advised acquisitions and a bloated payroll while mismanaging its lucrative stake in Chinese e-commerce company Alibaba Group.

In her rebuttal, Mayer described the $1.6 billion spent her more than 30 acquisitions as smart investments that have made Yahoo more competitive in the increasingly important mobile-device market. She also highlighted cost-cutting measures that have included closing eight offices, dumping 65 products and jettisoning about 1,600 contractors.

And she insisted that Yahoo wouldn't have been in a position to make as much money as it has on its Alibaba holdings if she hadn't taken steps to ease "years of tension and hard feelings" that existed between the two companies before she came to Yahoo.

"This team has now been in place for two years and we've achieved much more than many people realize," Mayer said.

Yahoo's biggest problem has been its inability to sell more digital advertising, even though marketers are shifting more of their budgets to the Internet and mobile devices.

The issue surfaced again in Yahoo's latest quarterly results, even though the company fared slightly better than analysts anticipated. Yahoo's revenue during the three months ending in September rose by just 1 percent from last year to $1.15 billion, a dramatic contrast to the 20 percent increase posted by rival Google Inc.

Yahoo's share of the roughly $141 billion worldwide market for digital advertising now stands at 2.4 percent, down from 3.9 percent in 2011, according to the research firm eMarketer Inc. Google holds a 32 percent share Facebook Inc.'s shares stands at 8 percent.

Mayer, a former Google executive, is the sixth CEO since 2007 to try to turn around Yahoo. It remains unclear whether she is on the right track, said Forrester Research analyst Shar VanBoskirk.

"I don't think anyone is in a hurry to get (Mayer) out of there, but the company remains a bit of a question mark," VanBoskirk said. "This is a critical time for her to demonstrate she has a long-term vision."

Investors gave Mayer a vote of confidence Tuesday, prompted in part by the third-quarter earnings. Yahoo's stock added $1.50, or 3.7 percent, to $41.68 in extended trading.

When Mayer arrived, Yahoo's stock was trading at just $15.65. But most of those gains since then have been driven by Alibaba's evolution into one of the world's most profitable Internet companies rather than anything Yahoo has been doing - a point that even Mayer has acknowledged.

Before Alibaba went public in a record-setting IPO last month, Yahoo provided one of the few ways for investors to own a piece in Alibaba. That's because Yahoo owned a 23 percent stake in Alibaba leading up to the initial public offering.

As part of the IPO, Yahoo sold 140 million shares of its Alibaba stock to generate a pre-tax windfall of $9.5 billon that was booked in Yahoo's third quarter. Lifted by that one-time gain, Yahoo earned $6.8 billion, or $6.70 per share, in the third quarter.

Now, Yahoo shareholders want to know how Mayer will spend the money from the recent windfall and whether she will come up with a way to reduce future taxes when the remaining Alibaba stock is eventually sold.

After taxes, Yahoo pocketed about $6 billion from the Alibaba IPO. Mayer has promised to return at least half that amount to shareholders, most likely by buying back stock. Yahoo has spent $7.7 billion buying back 293 million shares during Mayer's tenure so far.

Starboard wants Mayer to spell out a plan that will reduce Yahoo's taxes on future sales of Alibaba stock, possibly by spinning off the stake. Mayer didn't shed much light on that issue Tuesday, saying only that Yahoo is consulting with tax experts and will provide more details in January.
Related topics:
businesssan franciscosunnyvalemarissa mayerearningsbusinessfacebookgooglestocksyahootechnology
Copyright © 2020 by The Associated Press. All Rights Reserved.
RELATED 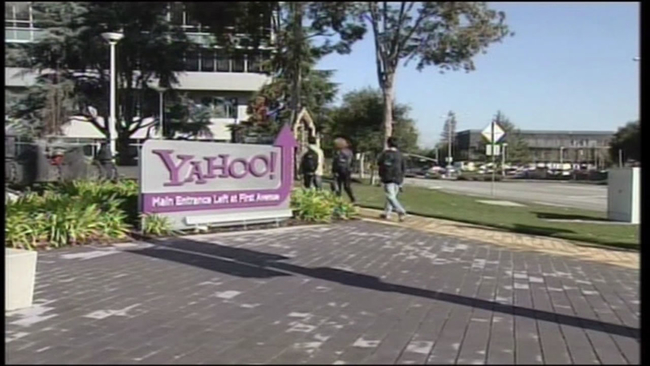 WATCH IN 60: 1st possible coronavirus transmission in general public in US, attack victim ID'd
Port of Oakland beginning to see effects of coronavirus on imports