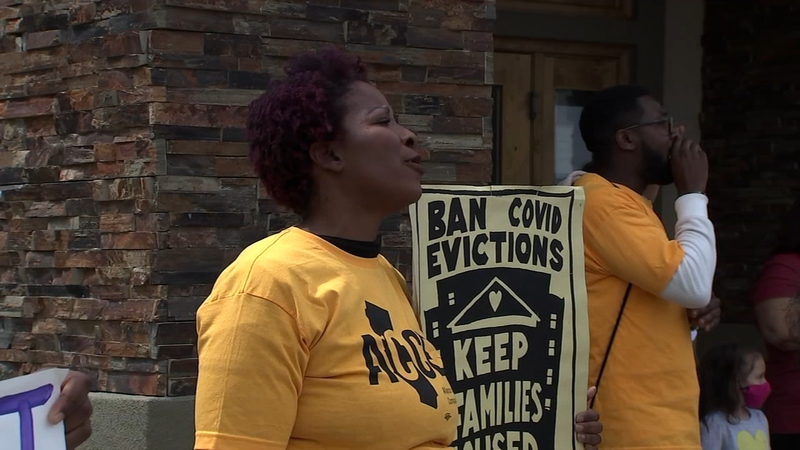 "I swear if it wasn't for the kids it wouldn't be as hard but the kids, knowing they don't know where they would sleep tomorrow. And we are good tenants we take care of things. We work as hard as we can but the system is not for us," said Miller.

Kamilah is a mom of six. She runs a daycare with her husband in their home but with the pandemic they lost business and fell behind in rent. They owe two months that's about $5,000.

If California's rent relief program expires tomorrow they could end up homeless. A reality they know too well. Their entire family has been homeless twice before.

"The whole school knew that they were homeless because they knew how they got to school every day. They knew where they were traveling from. It hurts because we've worked so hard to have a roof period," said Miller.

She joined a group of renters urging their city and state officials to pass a rent control ordinance or to extend their protections past Thursday.

Assemblymember Timothy Grayson's legislation AB 2179 could extend the eviction moratorium until June for anyone who applies for the states help by Thursday.

We're 24 hours from the deadline and the bill hasn't been approved yet.

"Tomorrow it goes to the Senate floors for a full vote of the senate. I'm absolutely confident that my colleagues see and feel the urgency of being able to help thousands of Californians keep a roof over their head," said Assemblymember Grayson.

On the other hand, landlords with the East Bay Rental Housing Association don't see AB 2179 as the solution.

"Does it really solve the problem? We know that at the state level there are over 500,000 applications that have been submitted. 160,000 have been processed. There is a backlog there that is incredible," said Derek Barnes, Executive Director of the East Bay Rental Housing Association.

Derek Barnes says landlords are feeling the pressure of the state's backlog. He says more than half of landlords they have helped haven't received any money from the state.

"For some of our members this has gone on for months. We constantly get calls about what are the updates? When is the money coming?," said Barnes.

For Kamilah an extension until June would mean having a home for her kids, but come July 1, it could be back to square one.

"I don't understand what this country is going to turn into if this happens because there are going to be so many people on the streets. How would anyone thrive if we don't have anywhere to live," said Miller.

Assemblymember Timothy Grayson said the federal government has taken a very long time to distribute the money which is impacting the states backlog. The state is processing over $9,000 applications per week. According to the policy link, there are still 350,000 Californians waiting on aid.

A San Francisco mother and daughter have avoided eviction thanks to more than a hundred ABC7 viewers who donated to their GoFundMe.

At this rate it's going to take at least nine months to go through the backlog.

Assemblymember Grayson is advising people who are behind in rent due to COVID reason to apply for the Housing is Key program before March 31. Even if the state doesn't accept their application he says they will still be protected from eviction until June if the bill passes.

"It is imperative that everybody knows that you must fill out an application and you've got to get into the cue. Once you are in the cue you are save until the end of June," said Assembly member Grayson.

California received $5.2 billion form the federal government for this program.

"HCD received $2.5 billion- the remainder of the funds went directly to jurisdictions to administer. HCD was recently reallocated money from the US Treasury totaling $198 million. HCD will continue to request additional funds from the U.S. Treasury so we can fund all eligible applications that we receive," said Alicia Murillo with Housing and Community Development.

To apply for Housing Is Key, visit here.

A GoFundMe page has been set up to help Kamilah and her family. You can make a donation here.