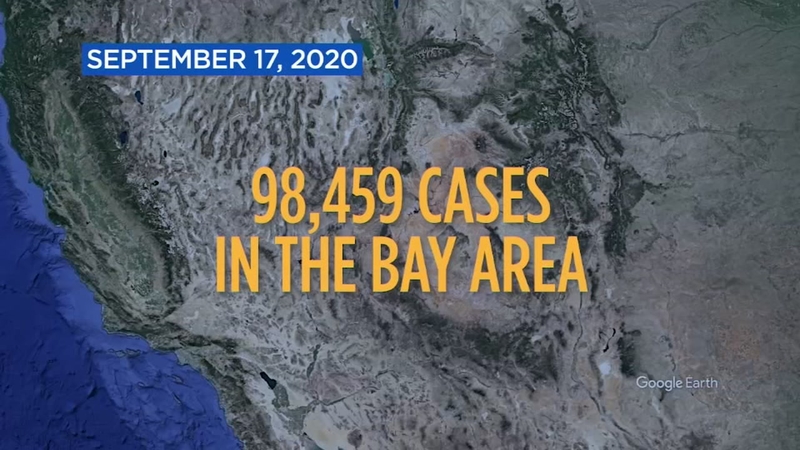 SAN FRANCISCO (KGO) -- Whether you've been healthy or sick, a member of the essential workforce or working from home, unemployed or working overtime, every person in the Bay Area has been impacted by the coronavirus since most of the region was ordered to shelter in place six months ago.

On March 17, when six of the Bay Area's nine counties issued shelter-in-place orders, there were only 375 diagnosed COVID-19 cases in the region. Many of us thought we'd be stuck in our homes for a few weeks.

Just how much has our world changed since the beginning of the coronavirus pandemic? Here's a look, by the numbers.

Collapse of the commute: BART ridership dropped 94% in the early weeks of shelter in place. It's still down 89% as of Sept. 15, as many continue working from home. Muni's average weekday bus boardings went from 405,000 on March 9 to a low point of 85,200 on April 13. That number has since climbed back up to 133,800 as of Sept. 7, which is still about a third of normal ridership. VTA said its ridership dropped by 80% in the wake of the pandemic. AC Transit ridership is rebounding, but still down about 56% year-over-year.

The number of cars crossing the Golden Gate Bridge dropped to 510,576 in April. That may sound like a lot of cars, but compare it to 1.7 million the same time last year. In June, the last month of available data in 2020, bridge crossings rose to 987,324, which is an increase since spring -- but still about half of normal.

Delivery apps boom: Active diners on Grubhub are up 35% year-over-year nationally. (The company did not have region-specific data available.)

San Jose company's stock "Zooms": The share price of Zoom stock was $408 in mid-September, compared to $111 in mid-March.

Work(out) from home: A set of dumbbells, which includes a set of 3, 5 and 8 lb. weights, will set you back $169 on Amazon, as gym closures have prompted a run on workout equipment.

Cost of "attending" a baseball game: No fans allowed at either Bay Area stadium, but it costs $99 to attend a Giants game as a cardboard cutout. The price is $89 for the A's.

Governments around the country are looking at ways to curb the spread of the deadly novel coronavirus. One way is to institute a shelter-in-place-order. But what does that mean and how does it work? We broke it down for you.

No summer crowds at Yosemite: The national park has capped day passes to about 3,600 per day, a 50% reduction from last summer's visitors.

Tiktok fads: The app now has about 100 million monthly users in the U.S., and 700 million users globally, as Tiktok crazes spread during shelter in place.

Staggering unemployment: Since the beginning of the pandemic, 8,289,867 Californians have filed for unemployment.

The human toll: The most staggering number of all is those directly impacted by COVID-19. The nine Bay Area counties plus Santa Cruz have seen 97,853 known cases and 1,358 deaths. While transmission has dipped substantially from its peak, the virus continues to pose a threat to people's health.