Up to 8,000 California inmates could be released early amid COVID-19 crisis

The CDCR said prisons are urged to follow normal release protocol if the credits move up a release date for an inmate.
KFSN
By Luz Pena
SAN FRANCISCO -- Gov. Gavin Newsom and the California Department of Corrections and Rehabilitation announced (CDCR) announced new programs that will allow for the early release of up to 8,000 inmates by the end of August to mitigate the spread of COVID-19 as outbreaks continue to flare up across the state prison system.

"These actions are taken to provide for the health and safety of the incarcerated population and staff," Ralph Diaz, Secretary for the CDCR, said in a press release on Friday. "We aim to implement these decompression measures in a way that aligns both public health and public safety."

Incarcerated people who have 180 days or less left on their sentence, are a low risk for violence, and are not serving time for a violent crime will be the first group of inmates eligible for early release.

The department said 4,800 inmates could be released by the end of July.

The CDCR will also implement a one-time Positive Programming Credit (PPC) award which will provide 12 weeks of credit to inmates who have "provided exceptional assistance in maintaining the safety and security of a prison" during the outbreak of COVID-19. Inmates who have been found guilty of serious Rules Violation Report between March 1 and July 5 will not receive the credit. Time credits will be applied by August 1.

Prisoners who are also deemed to have "high-risk" medical conditions will also be eligible for early release.

The department said all inmates will be tested for the virus within seven days of their release.

Officials are working with lawmakers and other agencies to help reintroduce the released people into society.

RELATED: 'Many errors that led to this crisis': Officials say they warned of San Quentin Prison's COVID-19 outbreak

Officials say those who are currently serving a life sentence without the possibility of parole, or have been "condemned" with a death sentence will not be eligible for a reduced sentence.

The CDCR said prisons are urged to follow normal release protocol if the credits move up a release date for an inmate, including making notifications to the victims of the individuals.

This all comes amid a grim situation at San Quentin State Prison, where seven inmates have died from COVID-19, and more than 1,300 others have tested positive for the virus along with 200 staff members.

The early release will include inmates who were scheduled to be freed soon and those with health risks. To qualify inmates must:

"The longer we wait and allow this ticking time bomb to continue, the longer we endanger people behind those prison walls and individuals who work there," she said.

Those 30-years-old and older will be prioritized.

"Thousands of people are in prison that are over the age of 50 and have been there languishing with these long sentences that had nothing to do with public safety," said Jay Jordan, executive director of Californians for Safety and Justice.

Jordan urges the state to invest in reintegration programs.

"We need to say 'hey no more of 50 billion dollars a year, we are not going to allow adding to this trillion dollar spending spree that California has been on in terms of the justice system.' We need real solutions, we need to invest in things that stop crime," said Jordan. 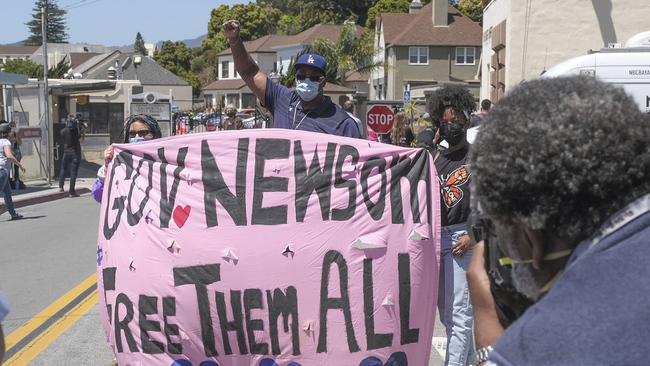