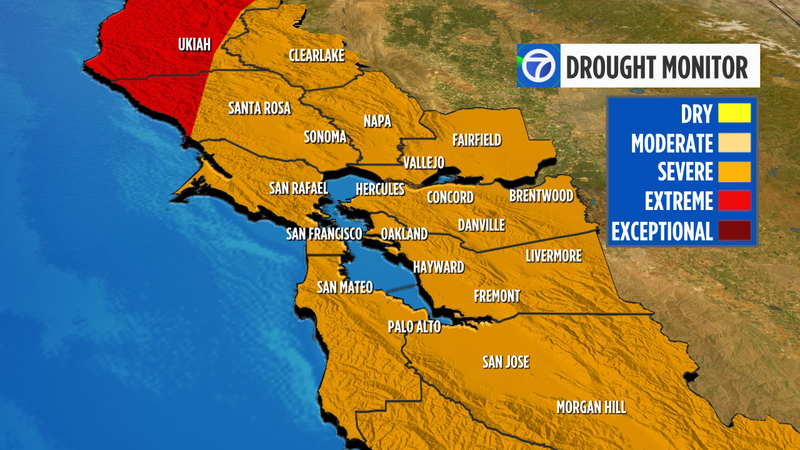 'Extreme' drought now back in parts of the Bay Area

SAN FRANCISCO (KGO) -- What we feared is now happening. According to new data released on Thursday, the Bay Area is now regressing in its progress with the drought due to the lack of significant rain in the region.

Now "extreme" drought has now made its way back into parts of the Bay Area.

Mendocino County and parts of Sonoma County are back in "extreme" drought and the rest of the Bay Area is in "severe" drought.

Next week, when the next monitor comes out, we may see more regions expand into the "extreme" drought category.

Comparing the last 2 weeks, extreme drought has expanded across Northern California now encompassing close to 7% of the state. Drought Monitor warns "additional degradation may be needed for California and the Great Basin in the weeks ahead." pic.twitter.com/WE8XYTvOfL

RELATED: Some San Jose residents could run out of water by summer if drought continues, expert says

It's been almost two months since the Bay Area has seen any substantial rain.

DROUGHT UPDATE
What we were worried about has begun, severe drought category has returned to parts of the Bay Area. We are going on 2 months without substantial rain. Will likely see extreme drought expand in the coming weeks. pic.twitter.com/JXJEe9LbTc