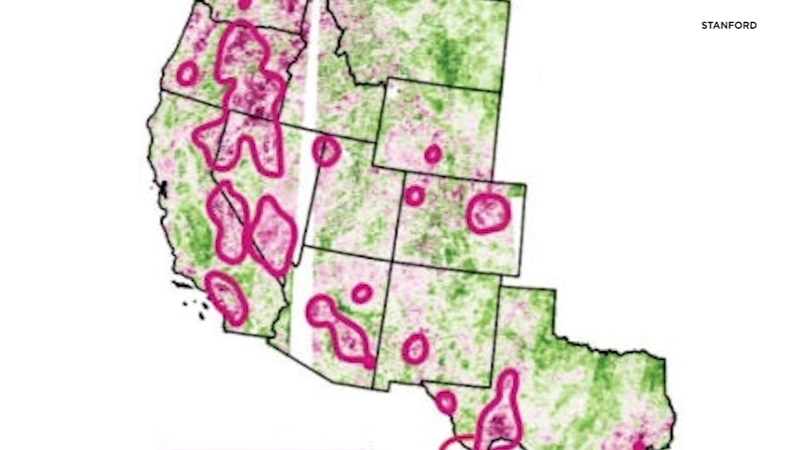 SAN FRANCISCO (KGO) -- Watching a wildfire race through dry brush, it may seem that the impact of drought and climate change is obvious. But understanding the global forces that increase fire danger is actually more complicated.

Stanford researchers Krishna Rao and professor Alexandra Konings, PhD, study the relationship between plants, moisture and fire. They've discovered that some areas in the West are more vulnerable than others. Regions they describe as double hazard zones.

"And so these double-hazard zones are regions where the faster drying out of the atmosphere, and the relatively sensitive ecosystem sort of drying out rates act as a double whammy in terms of increasing risk," says professor Konings.

Kongings and her team used satellite data to help measure plant-water sensitivity over time. The complex formula includes factors like soil and plant types, root depth, and the effect of surrounding air temperatures on how much moisture the plants retain.

"And we found that that property of ecosystems is closely related to how much burn areas increase under dry conditions. So we know that there is an increased potential risk in regions where these ecosystems dry out relatively quickly," she explains.

The Colorado Fire burning in Big Sur has many people talking because well... it's January. We talked to an expert who explains why were seeing this, the California drought and more.

They say the current satellite modeling is not designed to make short-term fire predictions.

But it does suggest that large swaths of Western forest and range land may be more vulnerable to wildfire than previously believed. Driven in at least in part, by the effects of our changing climate.

For more information on the study, visit here.