This comes after California experienced the driest January and February on record, dating back to the 1920's.
KGO
By Amanda del Castillo 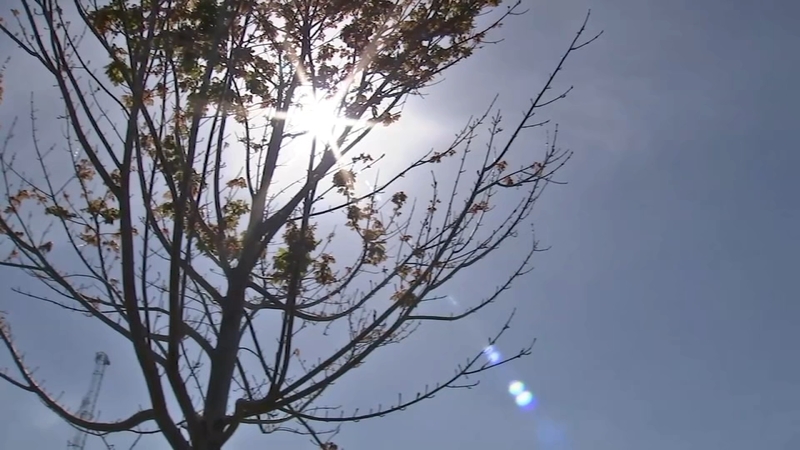 SAN JOSE, Calif. (KGO) -- Parts of the Bay Area are expected to heat up on Tuesday. Warm temperatures could be near record-breaking in some areas. The heatwave comes only days after Saturday's storm, which wasn't significant enough to impact drought conditions.

There is looming concern, as the state struggles to conserve water.

The warm weather and sunny skies forecast for Tuesday will bring a typical springtime event, according to Meteorology and Climate Science expert Alison Bridger. The San Jose State professor said that while the anticipated heat may feel unusual, temperatures will still be far from extreme.

"The record for San Jose is 83," Bridger shared. "So we might not even break any records. If it was going to be 93 tomorrow, then I think we'd be justified in being concerned."

She said the heat marks the ending of the rain year.

California's drought is expected to worsen this spring with warmer temps and lack of rain according to NOAA.

However, water officials warn this is a real issue as we head into a third year of drought.

"I know we just had a little bit of rain on Saturday, but that's- I wouldn't even call it a drop in the bucket," Valley Water spokesperson Matt Keller told ABC7 News. "It's just been nothing."

"For us to catch up to where we should be, we basically need one of those storms every day for the rest of the rain year," Bridger added. "And that's obviously not going to happen."

Keller said the water district really wants customers to think about severe drought and, "Understand that we just went through the wettest part of the year, and we saw virtually nothing as far as rainfall goes. And our snowpack is significantly reduced, compared to normal years."

The dry, warm weather is causing added concern after experiencing the driest January and February on record, dating back to the 1920's.

"We've only got records that go back about 150 years. So for all we know, this happened 300 years ago and everybody has suffered, but they got through it. Because here we are," Bridger said. "On the other hand, the flow situation in the atmosphere, and the fact that we've had no storms for the whole month of January and February does fit with climate change expectations that we're going to get more extreme weather."

Bridger added, the climate change trend is for the West to be drying out, warming up, and doing so gradually.

"January, February, March hit- nothing came. And then we're facing our reservoir levels being less than normal, our snowpack being below normal, our allocations are getting reduced. Down to next to nothing, I mean 5% for the State Water Project," Keller added.

Bridger with SJSU said as we inch further into spring, she anticipates fewer storms, even weaker storms.

"It can rain as late as the last day of May, or very early June," she said. "So, we're definitely trending down in terms of what we should expect this time of year."

"You'll have to come back in 10 years and see if every year is like this," Bridger added.

She said the concern is less about Tuesday's warm temperatures, but what recent conditions could mean for the winters to come.

"Drier winters with the occasional dry winter," she referenced. "And you really can't get drier than what we had in January and February."