'It will be a 3-ring circus' if recall election happens this year, CA political strategist predicts 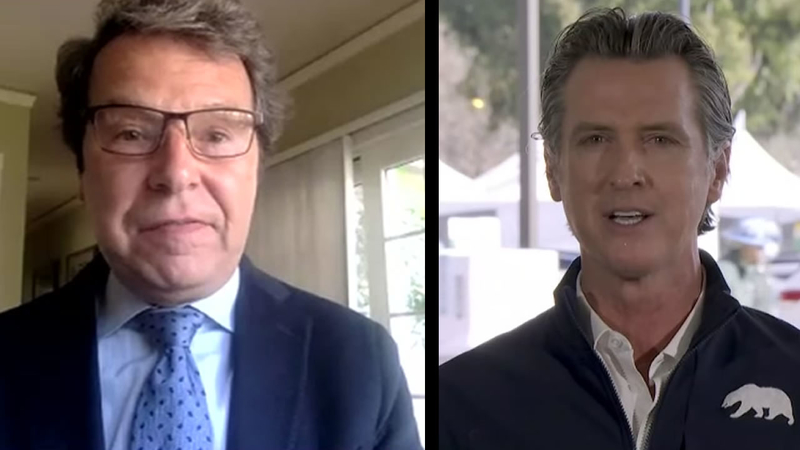 SAN FRANCISCO (KGO) -- One month from today -- March 17th -- is the deadline for organizers behind the "Recall Newsom" campaign to gather the 1.5 million signatures needed to trigger a recall election.

Organizers say they are well on track to hit that number.

RELATED: How does recalling a California governor actually work? Here's the process

So, what would a political year look like if there is an election to potentially recall Governor Gavin Newsom?

"It will be a three-ring circus," longtime Democratic political strategist Steve Maviglio told ABC7 News. "You can basically write a small check and get on the ballot."

During the 2003 recall of former Governor Gray Davis, more than 130 names appeared on the election ballot. Maviglio predicts this time around it could be even more.

In the year since California saw its first coronavirus case, Democratic Gov. Gavin Newsom has gone from a governor in command to one lurching from one political crisis to the next.

Whether or not a recall election happens, challengers on the right -- including former San Diego mayor Kevin Faulconer and San Diego businessman John Cox -- are already jumping into the race for Governor.

Faulconer, a moderate Republican, made his first campaign stop in San Francisco on Wednesday. He stood outside Abraham Lincoln High School making the case that public schools like that one should be open.

"Gavin Newsom has failed, he has been derelict in his duty, and what is happening here in San Francisco is one of many crystal clear examples," Faulconer told reporters.

Newsom has put out a plan to reopen schools, and in an interview with ABC News this week, he addressed the challenges he faces to make it happen.

RELATED: Recall Newsom organizers hit significant milestone for getting on the ballot

"I only have 1,050 school districts in California, independently elected. 70 cities, 58 counties. Gets even more complex: largest school system in the United States," Newsom said. "At the end of the day I want students back in school, clearly."

Faulconer and other critics of Newsom have criticized the governor for overstepping his powers with his executive orders during the shutdown. Still, Faulconer said if he were governor he would do whatever it takes to reopen schools.

"I would bring all powers to the governor's office to bear to get our schools safely reopened," he said, when asked if he would issue an executive order.

Maviglio, like many Democrats, believes that Newsom will not have a hard time running against Republican challengers. "I don't think Newsom has anything to worry about with anyone associated with Donald Trump in any way shape or form," he said. "And Kevin Faulconer has that baggage."

As California Governor Gavin Newsom faces a growing recall effort, the laws that allow for such an election are coming under scrutiny.

What he thinks Newsom should be worried about is another Democrat jumping into the race.

"I think the most important thing for Governor Newsom to do right now is to keep a Democrat out of this," Maviglio said. "The problem for Gray Davis was he was getting knifed on the left as well as the right."

Maviglio believes one Democrat that could jump into the race is former Los Angeles Mayor Antonio Villaraigosa, who ran against Newsom during the last gubernatorial race and has sources for raising money. But overall, it's a risky decision.

"It will be a steep uphill battle," Maviglio said. "Any Democrat who gets into this race will be a pariah in the party forever."