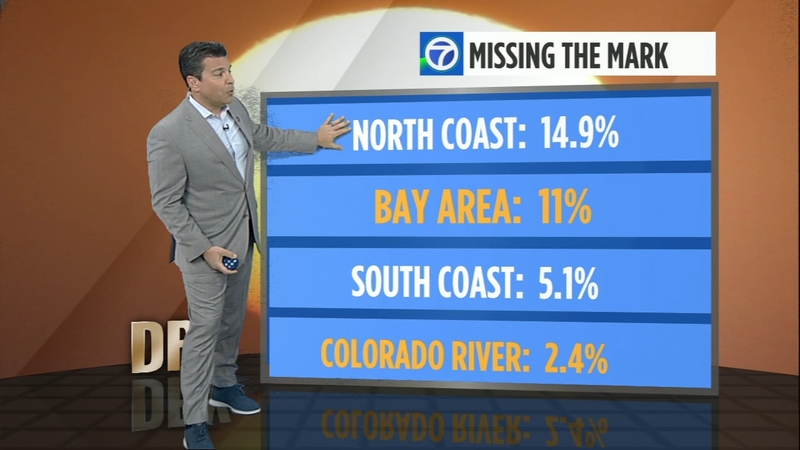 SAN FRANCISCO -- Californians used 2.6 percent more water in January compared to before the drought emergency was declared, a sign that urban residents are ignoring the state's pleas to take the drought seriously and cut back.

The increased water use in California's cities and towns came during the second-driest January on record, as the Sierra Nevada snowpack continues to dwindle -- and another dry summer looms.

The new data, which details urban water use statewide, shows that Gov. Gavin Newsom's repeated pleas for a 15 percent voluntary cutback in water use are failing to reach people in cities and towns. Yet Newsom has stopped short of issuing a mandatory order.

"With the voluntary call, some areas were doing okay, others not so well. The message gets pretty garbled. With a mandate, it's a very clear message about the need," said Heather Cooley, research director with the Pacific Institute, a global water think tank.

But water use nevertheless ticked up statewide in January compared to January 2020. The biggest increase was 19 percent in the desert region that includes the Palm Springs area and the Imperial Valley. The South Lahontan region, spanning the Sierra Nevada, mountain communities of Southern California and Death Valley, had the second highest increase, at 9 percent. Residents of the Los Angeles basin and San Diego County used 1.8 percent more water, while those in most of the Central Valley used 6 to 7 percent more.

The only regions that slightly reduced water consumption were the San Francisco Bay Area, which used 1.4 percent less, and the southern San Joaquin Valley, which used 0.2 percent less.

Overall, Californians from July of last year through January conserved about 6.5 percent statewide compared to 2020, according to state data -- falling far short of Newsom's requested 15 percent.

Now, a year after Newsom declared a drought emergency in hard-hit northwest counties, some experts say a state mandate is critical to keeping enough water in storage to survive a drought that could last a number of years.

Newsha Ajami, a longtime water researcher, said the mandate should have happened months ago, when reservoirs were low and there was no precipitation in sight. "Having a mandatory water restriction is in everyone's benefit," said Ajami, who is the chief strategy and development officer for research at Lawrence Berkeley National Laboratory.

The new state data only includes water use from urban water districts, not rural irrigation districts that serve farms.

"I'm also here on behalf of Governor Newsom to ask all of us to do more," Crowfoot said. "It's once again time for Sacramentans, residents of this region, Californians to step up and help us navigate through this drought."

Amid a major California drought, the Bay Area is hoping for lots of rain in March. Meteorologist Mike Nicco explains why that isn't likely to happen.

Under the statewide mandate issued during the last drought, water suppliers were required to conserve 25 percent statewide -- with regions assigned a certain percentage of water depending on their existing use -- or face escalating consequences that could result in fines.

Californians responded: They cut their water use by 23.9 percent between June 2015 and February 2016, compared to the same months in 2013, according to water board staff. Cities and towns still use less water daily than they did before the last drought began: about 17 percent less per person.

This time, however, many water suppliers have relied on ramping up outreach and rebates rather than imposing new restrictions or fines.

Ordering California's water suppliers to cut back further is likely to be a controversial move.

State Sen. Melissa Hurtado, a Democrat from Hanford, is skeptical that it would work.

"If we're still not even over the (COVID-19) vaccine mandate and the testing mandate, and now you're going to ask people to cut down on water consumption? That you should take less showers and you can't get a new pool or whatever it may be?" she said. "Yeah, no, that's going to make people really angry."

Hurtado called for structural and technological changes -- like developing more drought-resistant crops and fixing canals damaged by subsidence -- over behavioral ones. Those, however, take time.

Water providers caution against reading too much into the low January conservation numbers: It's harder for Californians to squeeze out additional savings during the winter, when many already cut back on watering their yards.

According to new data, parts of the Bay Area are back in the "extreme" drought category due to the lack of significant rain in the region.

In December, which had record-setting storms, Californians used 15.6 percent less water compared to the previous year, with the greatest savings in southern parts of the state. It was the first time Californians statewide crossed the 15 percent water conservation target that Newsom urged residents to meet last July.

Since July, the greatest savings came from the hard-hit North Coast and the San Francisco Bay Area. The least, from the inland mountains and deserts of central and southeast California.

Water systems on the North Coast "were the canary in the coal mine," said Marielle Rhodeiro, research data specialist with the water board's conservation program. "They were the first to start running out of water. I think there's a little bit more awareness up north, probably because we're closer to the immediate problem."

Some water suppliers crack down, others coax

For some local water agencies, voluntary calls for conservation have come close to meeting their own goals, though not the state's 15 percent target.

In the Bay Area, the East Bay Municipal Utility District upped its rates to fund improvements and asked residents to voluntarily cut water use by 10 percent.

The district ramped up rebates for replacing turf in yards and street medians, and launched an advertising campaign on streaming audio platforms and social media recommending five-minute songs for people to listen to while they showered.

It worked, to a certain extent: Water use decreased by more than 10 percent from July through December compared to last year, the district reported to the state. But now the savings are slipping; water use increased in February, according to water conservation manager Alice Towey.

"Clearly, it's becoming difficult (to conserve) this time of year, when nature is normally watering our East Bay gardens," Towey said. February was California's second driest on record.

Farther south in San Jose, insufficient voluntary conservation prompted the local water company to institute surcharges for those who exceed mandatory limits based on 15 percent cuts to water used above a minimum threshold in 2019. In November, the California Public Utilities Commission approved the district's mandate, which took effect in December.

Newsom also signed an executive order that encourages residents to reduce their water use by 15% voluntarily. That includes residential, industrial and agricultural areas.

Residents saved 20 percent more water in November compared to 2019 levels. With little outdoor irrigation to cut back in winter months, however, the savings evaporated in December and January.

The area lost about half of its above-ground water storage capacity due to earthquake retrofits for the region's largest reservoir.

For Liann Walborsky, San Jose Water's director of corporate communications, a statewide mandate would reinforce their efforts and drive home the message that conservation is critical. "I think it would just help validate all the work we've been doing since June," she said.

In the aerospace hub of Palmdale in the Mojave Desert, after the area received less than two inches of rain, local water officials faced the possibility of mandatory cuts last summer. Then they bolstered their supplies enough to make it through the dry months.

The district called for 15 percent voluntary cutbacks to reverse increasing water use as residents weathered the COVID-19 pandemic at home, stepping up outreach and advertising for its rebate program to replace thirsty landscapes. Rebates increased by almost 70 percent from around $53,000 in 2020 to more than $89,000 in 2021.

In the first half of 2021, residents used about 11 percent more than in 2020. But the latter half ended up about 5 percent lower.

Still, the water district's director of resources and analytics Peter Thompson is torn about whether it's time for a statewide mandate.

"The momentum of having the state come out with a mandate makes our jobs easier," Thompson said. "But California is huge. And it's diverse in terms of the different water agencies and their available water supplies. So it makes a lot more sense to make that an individual choice for each agency."

Mandates may not be enough

For some water systems, even mandatory calls for conservation haven't been enough to weather water shortages.

By May 2021, in the small coastal hamlet of Mendocino, residents and businesses were required to use 40 percent less water than their allocations. Wells still went dry, water trucked from other districts climbed in cost when it was available, and restaurants in a town reliant on tourism were forced to weigh whether staying open was worth the expense of washing the dishes.

Ryan Rhoades, supervisor for the Mendocino City Community Services District, said he filled buckets of creek water to keep relatives' toilets flushing. He said most residents managed to stay below the mandatory target, but estimates that about 5 percent didn't.

The county and state stepped in to help, subsidizing trucks to haul water 60 miles from Ukiah to a reservoir in nearby Fort Bragg to bolster the coastal towns' supplies. And though the conservation mandate was lifted after early winter rains, replaced by a call to voluntarily reduce use by 15 percent of each well owner's allotment, the city is bracing for another dry summer -- and hoping to prevent more shortages ahead.

Rhoades said he's awaiting word from the state on possible funding to tie into the local school district's water supply, drill more wells and increase storage. The wait, he said, is "frustrating and challenging, because people are aware that we have a problem, and we need help."

The state budget last year included $5.2 billion for drought response and water resiliency. Since the drought began, the Department of Water Resources has awarded more than $195 million to projects aimed at addressing shortages and bolstering emergency and longer-term supplies, including those supporting disadvantaged communities and tribes with well repairs, securing hauled water, and other efforts.

The State Water Resources Control Board tallies $9.75 billion in loans and grants for drinking water, wastewater, groundwater cleanup and stormwater capture since 2014, board chair Joaquin Esquivel said at a press conference last week.

Legislation enacted after the last drought called for urban water providers to develop water budgets based on a number of factors, including indoor and outdoor water efficiency standards. Calculating water budgets is expected to take through the end of 2023, but could pave the way for more sophisticated, targeted mandates going forward, said the Pacific Institute's Cooley.

But urban water use is just a small part of California's water supply problem.

Of all the water Californians use, about 20 percent flows through urban taps, hoses and sprinklers. Almost all of the rest is for agriculture, which pumps water from wells and also gets supplies from rivers as well as state and federal aqueducts.

During the last drought in 2015, Brown was criticized for not imposing conservation orders on agriculture.

"We should be doing more conservation in general, and particularly in drought years," said Jay Lund, a University of California, Davis, professor of civil and environmental engineering. "But the quantities of water that we will save from this conservation will not be enough to take a tremendous amount of pressure off of farmers or off the environment."

CalMatters environment coverage is supported by the 11th Hour Project and Len and Mary Anne Baker.