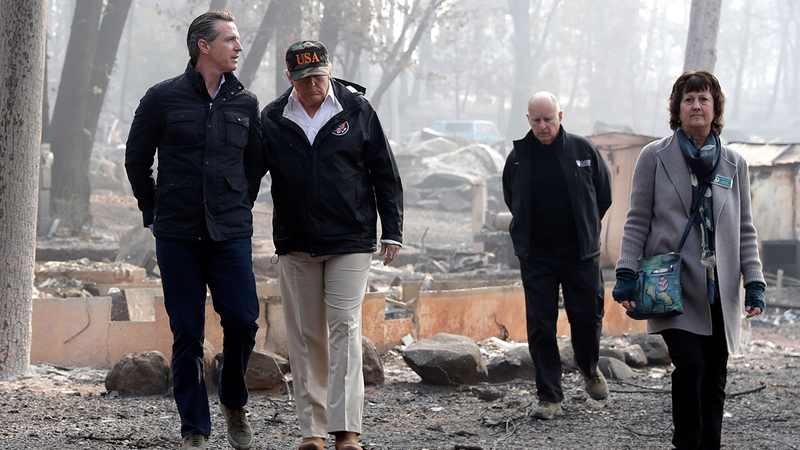 PARADISE, Calif. (KGO) -- When Air Force One and President Trump arrived at Beale Air Force Base it began a visit no one imagined would happen a little more than one week ago.

Moments after landing the President's handshake with Governor-Elect Gavin Newsom signified an unlikely alliance, for one day at least.

After a Marine One helicopter ride to Chico, the President rode by motorcade into fire-scarred Paradise. Mayor Jody Jones and Governor Jerry Brown joined him, among others. After seeing the ruins, the President answered a question about keeping fires like this from happening again.

"We do have to do management, maintenance, and will with environmental groups. I think everyone has seen the light," said President Trump. "This will not happen again."

The President's visit had more than a press pool watching.

Dozens of Trump supporters and protesters gathered outside his next stop, a Cal Fire command post in Chico.

That would be the President's last stop. He looked at a fire map, thanked law enforcement and first responders, then turned to FEMA Chief Brock Long, who described his agency's efforts.

As the President prepared to leave, a reporter asked about climate change, and its influence in this deadly fire.

"When you see devastation does it change your mind about climate change?" the reporter asked.

"No. No. I want a great climate and our forests to be very safe," said President Trump.

Governor Brown spoke about the tough task ahead.

"It's just a big massive cleanup after a terrible tragedy," Brown said. "So it's basically people that are right here-local people, state people that are doing the work."

Friday night authorities confirmed a new death toll of 76 and say they are trying to locate 1,276 people, even as they stressed that not all are believed missing.

The blaze that started Nov. 8 largely destroyed the town of Paradise, population 27,000, and heavily damaged the nearby communities of Magalia and Concow. It destroyed more than 9,800 homes and at its height displaced 52,000 people.

Before his visit, Trump had stirred resentment among survivors over comments he made two days after the disaster on Twitter, then reiterated on the eve of his visit.

In an interview taped Friday and scheduled for broadcast on "Fox News Sunday," Trump said he was surprised to see images of firefighters removing dried brush near a fire, adding, "This should have been all raked out."

Asked if he thought climate change contributed to the fires, he said, "Maybe it contributes a little bit. The big problem we have is management."

Those comments echoed his initial reaction to the fires Nov. 10 when he blamed the wildfires on poor forest management and threatened then to withhold federal payments. Trump subsequently approved a federal disaster declaration.

"If you insult people, then you go visit them, how do you think you're going to be accepted? You're not going to have a parade," Maggie Crowder of Magalia said this week outside an informal shelter at a Walmart store in Chico.

But Stacy Lazzarino, who voted for Trump, said it would be good for the president to see the devastation up close: "I think by maybe seeing it he's going to be like 'Oh, my goodness,' and it might start opening people's eyes."

We have more information on the Camp Fire here.