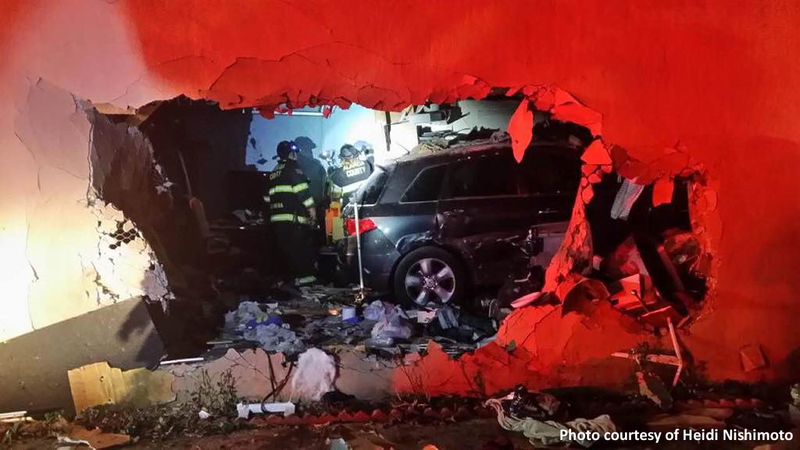 SAN LEANDRO, Calif. (KGO) -- A 25-year old woman was critically injured when a speeding car crashed into her San Leandro home while she was sleeping Monday night, pinning her underneath the vehicle.

The incident happened at the corner of Purdue and Farnsworth streets.

Neighbors say the victim had been planning to celebrate her engagement this week. She was sleeping in a converted garage behind a now yellow-tagged house. A tarp now covers the hole made by an Acura SUV as it broke through at high speed Monday night.

Neighbors in the quiet neighborhood have neither seen, nor heard anything like it. Some said the car was airborne.

"I thought maybe a transformer went off, or something. We heard a huge crash," said neighbor Roxanne Williams.

Instead, there was a horrific scene after the SUV, driven by a still unidentified 20-year-old San Leandro man, ran a stop sign, clipped a car, lost control and plowed completely through the wall of the garage before landing atop a young woman sleeping inside.

"One of the officers described that she appeared to be folded in half at the waist," said Lt. Robert McManus of San Leandro police.

Police say she remains in critical condition. She was one of eight residents in the home.

The victim's family kept to themselves Tuesday. They said only that they spoke with police.

The house's garage is still bulging from the force of last night's impact. Witnesses and police say the SUV may have been going close to 100 miles an hour.

"I have been in the business for a long time and I have seen a lot of collisions. I have never once seen a car strike a house, that has completely penetrated the wall and landed inside," McManus said.