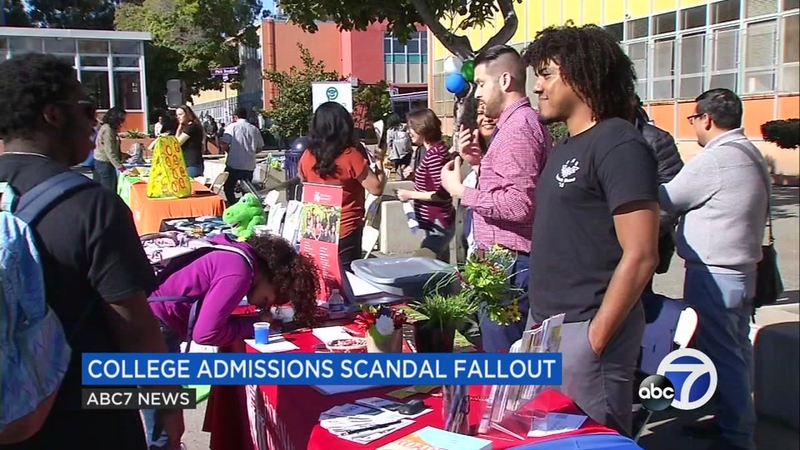 OAKLAND, Calif. (KGO) -- The college fair at Castlemont High School in Oakland was part of Thursday's celebration of Oakland Promise, a community based program aimed in part at helping low-income and minority students to go to college.

"I want to say, once again, we all need to help (in) this whole process," says Jamal Cole, speaking at the event. He graduated college with the help of Oakland Promise.

"I have come from a rough situation growing up. My father raised me. Grew up in an area that was crime-ridden," says Cole, describing his childhood.

But learning of current college admission scandal, Cole says students with backgrounds similar to his now have another obstacle to overcome: cheating.

"They didn't put the hard work in, and it's frustrating," he says, adding that it is about more than just college. It's about jobs, too.

"Situation at (prestigious) institutions... where they can just by pass (the admissions process) and get a degree, and have a high paying a job... and (they) may not have earned it," Cole says.

"It's completely unfair and makes me feel devastated," he says.

He is a first generation American and the first member of his family to graduate high school.

He says he knows that some wealthy students use personal ties to gain access to elite colleges, but that the current scandal exposes a bigger problem.

"It was kind of already implied, but now that it's a reality, it's a reality that, oh, you actually had a real shortcut, and I am here struggling," says Ramirez-Martinez, as he shakes his head in disbelief.