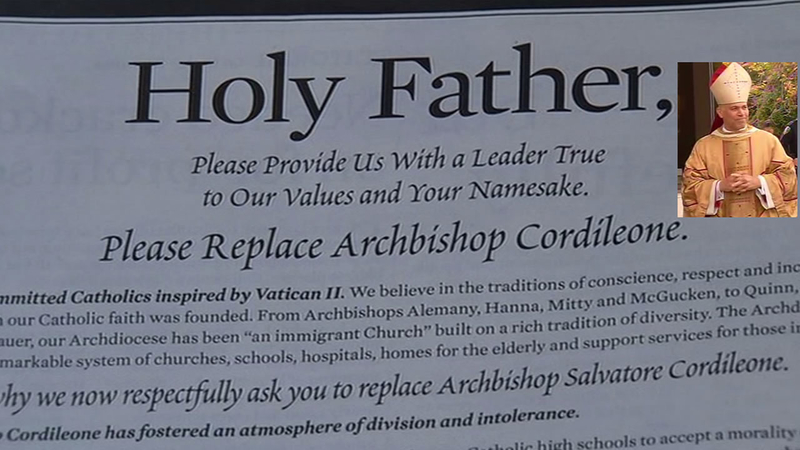 The full page newspaper ad was signed by a group of Catholics opposed to the archbishop's views. The critics include some famous names.

The ad would have included a lot more signatures but those behind it said they needed space for the actual message, asking the Vatican to remove San Francisco's archbishop.

"Our hope is the pope recognizes both from our message and this that we are serious," said church member Michael Kelly.

Those behind this letter say they are Catholics from different backgrounds who oppose the policies of Cordileone. For example, the archbishop wants anyone who works at Catholic schools or for the archdiocese to sign a moral clause.

"From using birth control to advocating for stem cell research and voicing opposition to the notion that women someday might be priest," said Kelly.

Pia Hinckle, a mother of three is worried about the impact this could have on Catholic schools.

"I'm very worried that those teachers in particular might decide why should I put up with this," said Hinkle.

The Archdiocese of San Francisco released this statement:

"He's doing his job and I think that's why he's here and he's standing up for what the Catholic church believes," said church member John Moore.

The ad says Cordileone is mean-spirited and fosters an atmosphere of intolerance.

This group of Catholics call attention to the marked differences between the archbishop and Pope Francis.

"Do we expect the pope to say, 'oh thank you, I am replacing him tomorrow.' I think that's not going to happen, but we're not going to go away," said Kelly.

They say they will continue to use their contacts in Rome to press the Vatican for change.

Ad in @sfchronicle calling for Archbishop to be replaced. "Appeal to Pope Francis from Catholic community of SF." pic.twitter.com/jIYZCXkTTm