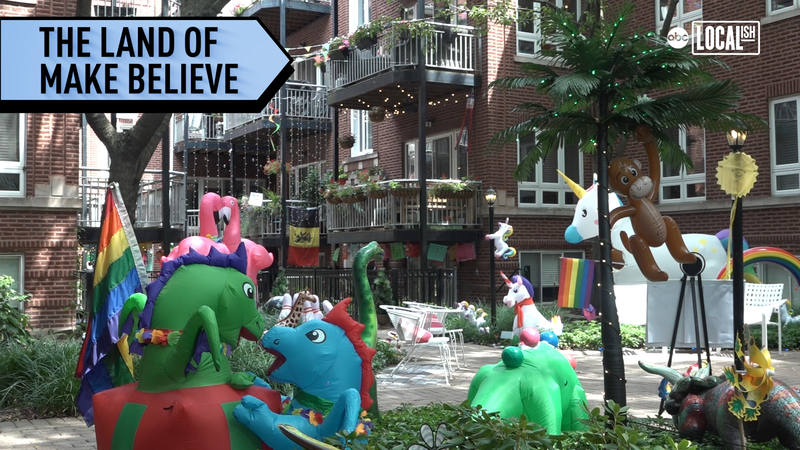 CHICAGO -- We all need a little escape from the struggles of the pandemic, and one Chicago neighborhood has created a "Land of Make Believe" to help residents do just that.

Some neighbors in Chicago's Uptown neighborhood put together a big display of balloons to bring a smile to people's faces.

"At one point, I had to stop people from buying more stuff," condo resident David Geranen said.

Neighbors have donated more than 40 colorful inflatables, including dinosaurs, unicorns, rainbows and flamingoes.

The light-hearted display can be found at 908 W. Agatite Ave.

"This is by no means solely funded by any one of us," Geranen said. "It's actually been the result of contributions of more than half of the people who live here."

After a series of socially distant happy hours, the neighbors of the condo building decided to decorate their courtyard to lift spirits during the quarantine.

The idea came about in April. They had no idea that the display would be up for nearly five months.

"I think most of the neighbors think we're completely dotty," Philippe Collon said. "It never started as a project doing anything, it started as 'Let's do something funny'."

Not only has the display brought smiles to the Uptown neighborhood, but it's encouraged a stronger community feel within the condo building.

"As with every regular condo building, there were a lot of people that nobody knew. This has changed things dramatically, it really has brought us together as a group of people that know each other, trust each other and that's important in these times," Collon said.