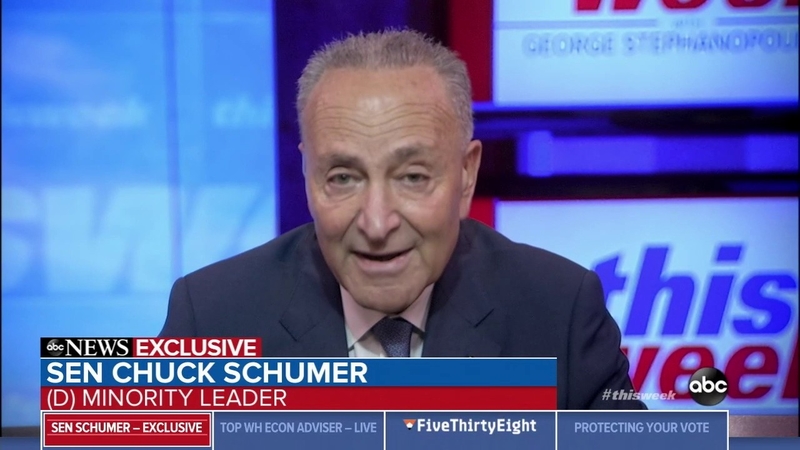 "The event at the country club is just what Trump does. A big show, but it doesn't do anything," Schumer said during an exclusive interview with ABC's "This Week."

Trump signed four orders Saturday in response to collapsed negotiations over a new stimulus bill designed, in part, to address the coronavirus pandemic's crushing impact on the U.S. economy.

Perhaps most significantly, one order replaced an expired unemployment benefit with a lower amount, reduced from $600 per week to $400. How many people would receive the benefit and how long it might take to arrive were open questions.

Schumer voiced his dissent to slashing the jobless aid boost by one-third, arguing that the $600 benefit helped propagate consumer spending and keep families out of poverty.

He also rebuked the GOP argument that offering too much federal unemployment aid keeps Americans from going back to work.


"Americans want to work, but with 10-11% unemployment, you can't find the job, and people shouldn't be given a pay cut," Schumer said.

He also called the order "unworkable," considering Trump is asking states to now cover 25%.
"This will take months to implement it since it's brand new and put together with spit and paste," he said.

"There's still a lot of hardship out there there's a lot of heartbreak out there and the point that President Trump made yesterday, is that on several occasions, we tried to get -- for example -- a compromise deal on the unemployment assistance," he said.