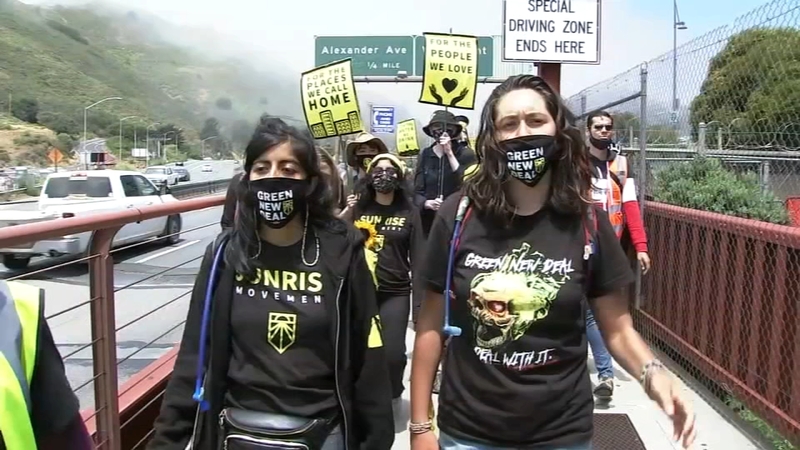 SAN FRANCISCO (KGO) -- Young activists from across the state marched across the Golden Gate Bridge to the homes of Senator Dianne Feinstein and House Speaker Nancy Pelosi, demanding support for the Civilian Climate Corps Act as "the first step of implementing the Green New Deal."

ABC7 News reporter Luz Pena spoke to the activists, who say their march will not end in San Francisco and their call to action is resonating with more youth across the nation.

"What do we want? CCC. When do we want it? Now!" That is the message young climate activists chanted as they marched across the Golden Gate Bridge.

Luz Pena: "Lola ,what are you marching for today?"

Lola Guthrie: "I'm marching for Civilian Climate Corps. I'm sick and tired of watching my politicians make promises about protecting me and my generation."

The Civilian Climate Corps Act was introduced by Representative Alexandria Ocasio-Cortez and Senator Edward Markey in April. Their goal is to create federally funded projects to help communities respond to climate change and transition to a clean economy.

RELATED: Allies in Action: Bay Area's 'Revolution of Black Youth' and how it started

These youth see that act as the first big step of implementing the Green New Deal.

Luz Pena: "What do you hope to accomplish today with your team?"

Lola Guthrie: "We hope that Nancy Pelosi and Dianne Feinstein hear our message. We want to make sure that they know we see their lies."

The march across the Golden Gate Bridge to the homes of House Speaker Nancy Pelosi and Senator Dianne Feinstein is the last leg of their 266 mile March. On May 28, seven of these climate activists with the Sunrise Movement began their trek in Paradise, California.

"Starting off in Paradise was quite overwhelming. I had never been to that part of the state being from Southern California. You can still see the devastation that was there," said Vianni Ledesma, one of the young activists for "Sunrise Movement."

Thousands of Armenian Americans and their supporters marched across the Golden Gate Bridge Saturday to call for an end to conflict. A conflict with deep history between Armenia, Turkey and Azerbaijan. ijan.

Paradise resident Allen Meyers gave the ashes of his family's home to the group.

"It's meant to illustrate the urgency of the reality we are living in," said Meyers.

Seventeen-year-old Ema Govea says this is only the beginning of their efforts.

"We will keep fighting and doing whatever is necessary to show them what this beautiful future that we envision could look like," said Govea and added, "A Green New Deal is a way for our country and our economy to transition from fossil fuels into renewable energy."

With every mile this group hopes to inspire others along the way.

"The courage and resilience of the young climate activists marching for climate justice is an inspiration.

"The climate crisis is the existential threat of our time and requires bold and immediate action, which is why House Democrats have presented the most ambitious, impactful and forward-looking climate response in Congressional history. Democrats' response includes passing historic bills to reduce pollution, invest in clean energy and lower global temperatures; launching the Solving the Climate Crisis Action Plan, which is the boldest climate plan in history and called for the creation of the Civilian Climate Corps; improving parks and preserving millions of acres of wild and scenic places; and traveling around the world and hosting global climate summits that put environmental justice front and center of the agenda."

"With President Biden in the White House, Democrats' action will continue to accelerate - including as we work with the Administration to reach the goal of cutting carbon pollution in half by 2030 through the American Jobs Plan. Congressional Democrats support the goals of the Civilian Climate Corps and look forward to working with the Administration to enact it in the Jobs Plan. They share the President's commitment to robust workforce development and initiatives that connect workers to good-paying local jobs in industries focused on combating the climate crisis and protecting natural resources

"Environmental justice for all is a priority and a bedrock value for Democrats."

ABC7 news contacted Senator Dianne Feinstein's office and have not received a response.