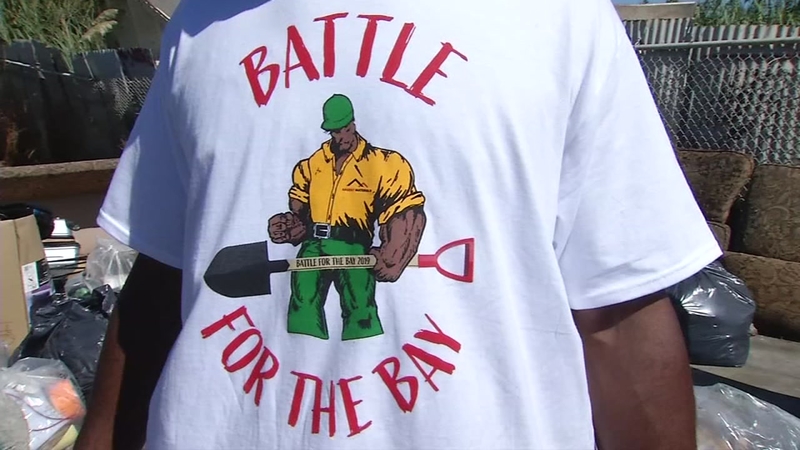 SAN FRANCISCO (KGO) -- Up and down the Golden State, thousands of volunteers were out picking up trash. It was part of the 35th Annual California Coastal Cleanup Day.

One of the goals is to prevent single use-plastic items and other litter from polluting the environment and flowing into California's waterways. Residents from 55 of California's 58 counties took part.

"It hurts to see my community look this bad, so having an opportunity to come out and clean up whatever I can, little by little, it helps out," says Carlos Padilla. He lives in San Leandro but volunteered at a cleanup site on Pearmain Street in Oakland, an area notorious for illegal dumping.

"It is quality of life. So, if you let your communities go, to deteriorate, it's just to lead to more deterioration, more crime, more violence," explains Supervisor Miley.

1- Communities across the #BayArea and #California took part in cleaning up #trash along the #coast and inland #shoreline. More than 65,000 expected to #volunteer in 35th annual #CoastalCleanup. #BattleForTheBay@abc7newsbayarea pic.twitter.com/FIujKS6Kpi

The mayors of Oakland and San Francisco turned this year's event into a competition - later joined by San Jose - calling it the Battle For the Bay, to see which city got the most volunteers and cleaned up the most trash.

"(San Francisco) Mayor Breed Mayor breed and I are a little bit more collaborative, so we call it the Battle for the Bay. Of course, (San Jose Mayor) Sam Liccardo got a little jealous and had to jump in there," jokes Oakland Mayor Libby Schaaf.

Mayor Schaaf says the focus this year in her city is on neighborhoods with high levels of illegal dumping.

"(There are) couches, beds, it is ridiculous! Take your junk to the dump, people!" says Mayor Schaaf about what people found during Saturday's cleanup.

2- #BayArea cities of #Oakland, #SanFrancisco and #SanJose in competition for which city can collect the most #garbage.https://t.co/ao5kNSGLfG#BattleForTheBay#CoastalCleanup
Losing mayors will #volunteer in winning #city, dressed in color of that city's #sports team. pic.twitter.com/mZHJrfHUBq

Mayor London Breed says she was excited about the huge turnout in San Francisco.

"(In) the Bay View-Hunter's Point community, we have had the largest number of people register on the east side of our city, ever! It has been absolutely amazing," says Breed.

Organizers of Coastal Cleanup say it is one of the longest-running volunteer events in California. Over 25 million pounds of trash have been picked up over the past three decades.

Bianca Guerrero is team San Francisco but says this problem is bigger than the Bay.

"The planet is important. We got to keep it clean, especially for the next generation... for the kids," says Guerrero.