Lead vocalist Chris Martin says it's a way to become part of the environmental side of the Music of the Spheres tour.
KGO
By David Louie 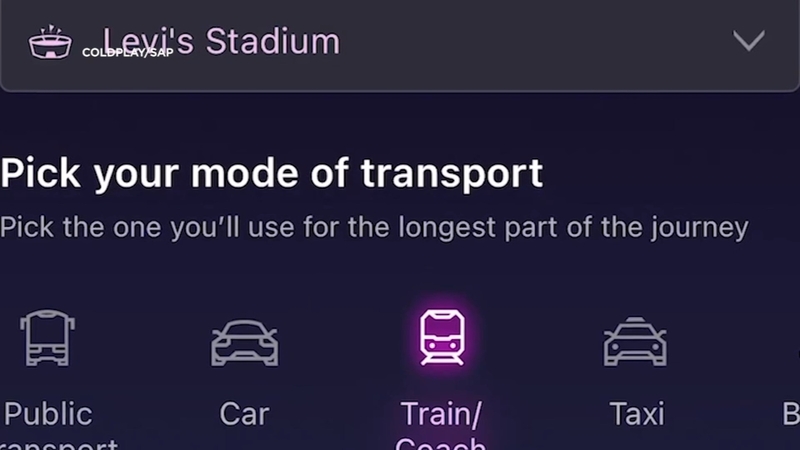 SANTA CLARA, Calif. (KGO) -- Coldplay has been sending fans a message on their app ever since Music of the Sphere tour tickets went on sale seven months ago - reduce your carbon footprint and earn a 10% discount to the May 15 show that also features the Bay Area's H.E.R. One way is to take public transit.

"It helps you to become part of the environmental side of the show by looking at the cleanest and greenest way you can get to the concert and home again and offset those emissions," said Coldplay's lead vocalist Chris Martin.

The performance at Levi's Stadium could draw as many as 68,000. Normally, about 10 percent of them, or 6,000 people, use VTA's light rail trains. Fans who support the band's call for sustainability might create a spike in ridership. The app was developed for Coldplay by SAP.

"One of the key insights that Coldplay told us from the very beginning, is we want to be subtle and not preachy," said SAP senior vice president V. R. Ferose. "We don't want you to feel guilty about anything."

The free app has been downloaded more than 10,000 times on Google Play.

"We do very gentle nudges on the app," noted Ferose. "If you say, 'I'm traveling alone,' they say, 'Why don't you try to travel with someone else?'"

VTA, the South Bay's transit agency, couldn't be happier. The app even includes a map showing the location of the nearest light rail station.

"There's a station right in front of Levi's Stadium that they can get off, go to the concert, get back on, get home. It's an easy ride," said VTA spokesperson Stacey Hendler Ross. "It's $2.50 one way, so it's cheap, easy and sustainable."

The app has a carbon calculator. The band says it'll plant one tree for each ticket sold. It's taking other steps to minimize carbon. But its greatest impact could be setting an example for other groups and events.

"Good behavior is something that we all want to be associated with," said SAP's Ferose. "So I think it's a matter of a band like Coldplay doing it encourages everybody else to do it."