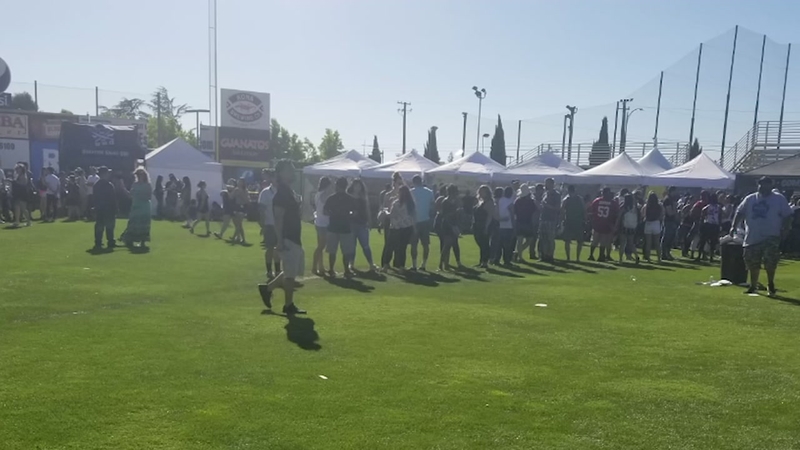 SAN JOSE, Calif. (KGO) -- A festival in the South Bay that event-goers say promised "unlimited" beer and tacos fell short of expectations. 7 On Your Side's Michael Finney tells us some people left with a bitter taste.

Joanne Kindel received flowers and heartwarming cards for her birthday. But this is the gift she wanted to share with friends: a good time at the Bay Area Taco and Beer Festival.

"Unlimited tacos, unlimited beer, walking around multiple venues of booths to go to and lots of tastings," Kindel said.

But according to Kindel, the wait for one free taco was 90 minutes.

They ran out when she was halfway through the line.

"Never got a free taco. By that point they started charging $2.50 for a taco. This was news coming up the line from us," said Kindel.

The event ran from 3 to 6 in the evening; those with VIP tickets were let in an hour early.

"A lot of people were starting to walk out as soon as they put their signs up that said they were no longer giving out the free tacos, " said Claudia.

"Such a terrible event," said one poster on Reddit.

A spokesperson at Excite Ballpark where the festival took place identified the event promoter as Brandon Mozley of Live Free Events. We reached out to Mozley a half-dozen times over several days, but he did not get back to us.

Eventbrite, which sold the tickets, did respond to our inquiries. It told us, "In the rare instance that an event significantly under-delivers on what was advertised, we work with all parties to reach a fair outcome. In this case, we've been working with the organizer to issue refunds to attendees who have requested them."

All four people who contacted 7 on Your Side have received refunds.

We'd like to thank Eventbrite for stepping up to arrange the refunds. Two of the four festival-goers who contacted us actually received their refunds prior to 7 On Your Side contacting Eventbrite.