CONCORD, Calif. (KGO) -- People are bringing treats, dog toys and flowers by the Concord police station to celebrate Jelle, the hero dog. Officers say Tuesday afternoon a man armed with a hatchet and hedge trimmers went on a rampage and Jelle tried to protect the officers.

There was a stab wound to the head which did not penetrate deep enough to cause brain injury, so we repared that," said Veterinarian Matthew Blanching.

Veterinarians who treated the dog say he was also badly beaten with a blunt object.

Around 2:00 p.m. Tuesday police say 30-year-old Dominick Musulman of Antioch attacked an acquaintance in a home on Crawford Street, striking the victim multiple times with a hatchet.

According to officials, Musulman then ripped off his clothes as he ran naked down the street and climbed fences into backyards, ending up at a house where he lunged at police and Jelle with a large hedge clipper.

RELATED: K-9 stabbed by suspect in Concord recovers at home

"Once he got past the dog, and after he attacked the dog he got up and went after officers with the sharp shears in his hands," Concord Police Ofc. Chris Blakely said. "And they were in fear for their safety so they had to use lethal force."

Witnesses say they heard four gunshots. Musulman died at the hospital. The two officers are now on administrative leave as the district attorney's office investigates the shooting. Police say Musulman was out on parole and had numerous arrests on drug charges. 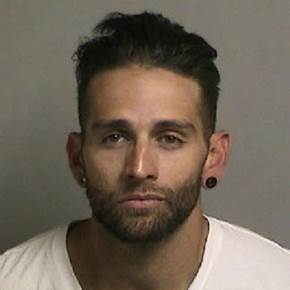 Neighbors were still in shock over the attacks. "I'm glad the dog survived," said neighbor Tom Pile. "And I'm also glad that the guy who was stabbed survived."

The injured man is in stable condition.