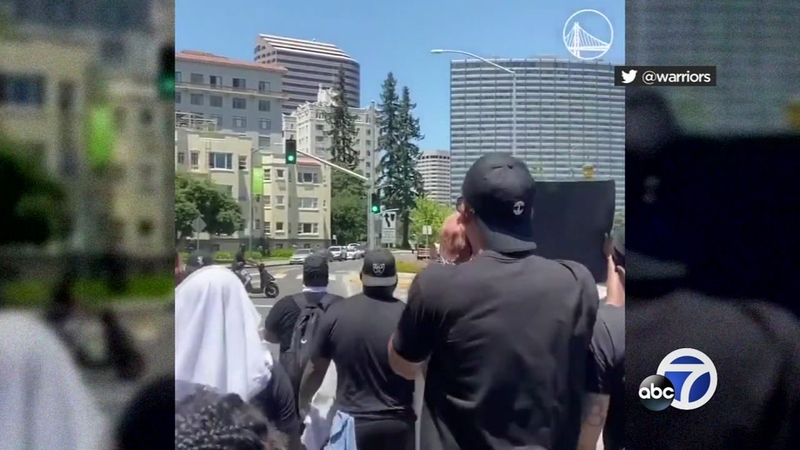 SAN FRANCISCO (KGO) -- One of the issues that have been brought forth from the awakening of the Black Lives Matter movement is the inequity in access to education and technology.

One community group that's been quietly working this past decade to ensure that people of color in East Palo Alto and surrounding areas get access is Streetcode Academy. It's a tech education school that offers free coding classes year-round for underserved communities.

Its mission to advance digital inclusion is a cause that Warriors superstar Stephen Curry supported publicly this week. One of the co-founders of Streetcode Academy is Squint, who grew up in Palo Alto and a filmmaker, photographer and storyteller.

Squint joined ABC7 News Anchor Kristen Sze on Midday Live to share Streetcode's mission, its campaign to get 2,500 laptops into the hands of under-served local youth, a beautiful photo he captured of Ayesha and Riley Curry at this past weekend's protest in Palo Alto and a long conversation he had with his friend Stephen Curry on Streetcode Live on Instagram.

Curry shared with Squint an insight that he and Ayesha had as they took part in a George Floyd protest around Lake Merritt in Oakland, the site of several Warriors championship parades.

"It's amazing, it's overwhelming and it's sad to think that we had a million people out there celebrating us winning a championship those three years... and just the level of excitement, noise and energy and pride over what the Warriors had done and this and that. Now fast forward 4.5-5 years later we're protesting social injustices that had been around forever. we're all trying to use this moment to change generations. She started crying around that point. Why can't we have that same energy and same excitement about something that's dealing with humans and their experiences, and valuing people of all different backgrounds, valuing what the black community has given to this country," Curry said.

Curry and Squint share the conviction that communities of color must be empowered with the skills, mindset and networks to use tech to fulfill their potential. That's why Streetcode is launching a new campaign, Level Up, to raise $2.5M in order to procure 2,500 laptops, internet access and free tech education classes to local students.

Streetcode estimates 9,000 community members do not have laptops at a time when distance learning has amplified the disparity between kids who have these tools and kids who do not.

"We saw a need very early and so now, it's more urgent than it's ever been, so we're just hoping people join and support us," says Squint.

Squint also shared a poignant photo he captured of Ayesha Curry and daughter Riley at the Palo Alto rally.

"I had my two boys who are 9 and 6, and Ayesha's holding Riley next to them, it was such a sincere moment so I had to capture this. No one really knew it was them at the time. It's like a mother's love just the way she was embracing her daughter," said Squint.

A mother who dreams of a better future for her children, like any other mother.

To learn more about Streetcode Academy and Level Up laptop campaign, visit https://www.streetcode.us/
Here's the full interview with Steph Curry: