The incidents were the 2015 shooting of Mario Woods and the 2016 shooting of Luis Gongora.

JUST IN: The San Francisco District Attorney @GeorgeGascon announces his office will not charge the police officers in the Mario Woods and Luis Góngora shootings. pic.twitter.com/bFaqQQ9pRB

Gascon said no crime was committed by police based on the current law, therefore his office could not charge the officers involved. "We do not bring charges against people who have not broken the law," Gascon said.

The announcement was made after Gascon met with Gongora's family. Woods' mother, Gwen, was also invited, but she was not present during that meeting.

In a December 2, 2015 cellphone video, you can hear a woman yelling for 26-year-old Woods to put down the knife he was holding. Police said the knife had been used by Woods earlier against another man. Despite police shooting beanbag rounds at Woods, he never dropped it and police then fired 26 rounds.

For the first time, the man who says he was stabbed by Mario Woods speaks exclusively to ABC7 News reporter Vic Lee about the encounter.

In that case, police argued that they feared for their safety and the public's well-being.

The same applied to this April 7, 2016 shooting, when witnesses say 45-year-old Gongora, holding a knife, confronted police. A home security video doesn't show the moment Gongora was shot, but you can see when police arrived and you can hear how it unfolded only 30 seconds later with police shooting and killing Gongora.

In the video, officers can clearly be heard ordering Gongora to put down the knife, before using the non-lethal rounds and then the lethal rounds.

Gongora was taken to San Francisco General Hospital, where he died from his injuries.

The shooting prompted wide-spread community outrage and put pressure on the police department which eventually led to the ousting of then San Francisco Police Chief Greg Suhr.

Gascon told reporters the current law needs reforming. He is now behind assembly bill 931 which would allow police to use lethal force only when necessary, not when it's reasonable. "As a society, we are failing some our most vulnerable communities when it comes to police use of force, " said Gascon.

Right after both incidents, the officers were placed on paid administrative leave fore 90 days. When they returned, they were put on desk duty pending the outcome of the DA's investigation.

Gascon: “Under the law no crime has been committed. Still, I am very disturbed, but must adhere to the law. “ The D. A. is referring to the shootings of Mario Woods and Luis Góngora. pic.twitter.com/s4pyE7wP6N 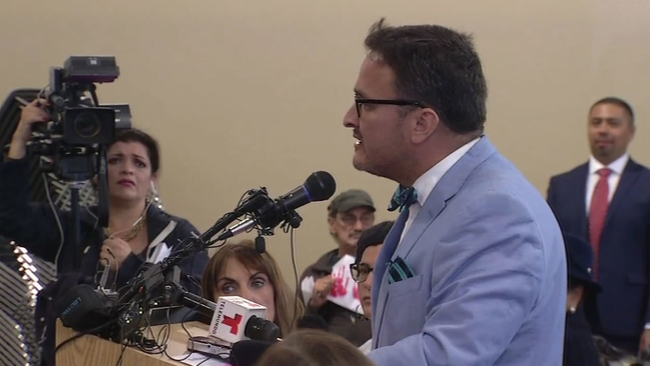