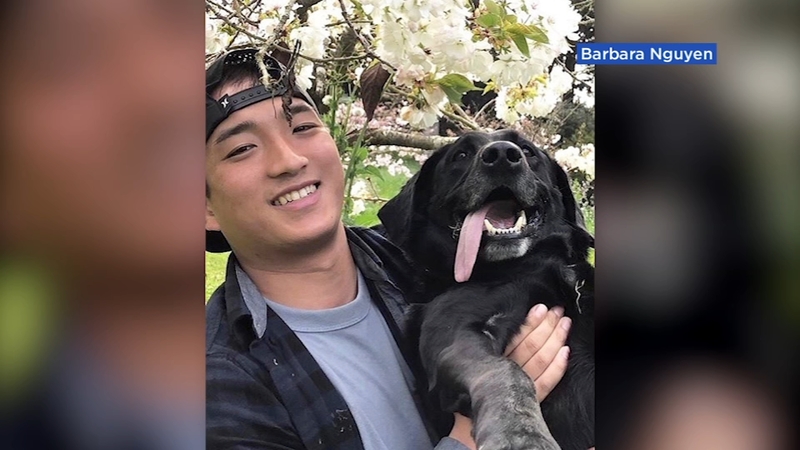 LIVERMORE, Calif. (KGO) -- A funeral was held today for an Alameda County Sheriff's Office recruit who was shot and killed while driving home on I-580 near the Bay Bridge Toll Plaza earlier this month.

Inside the church, it became apparent just how David's spirit and energy brought together all walks of life.

Today is the funeral service for 28-year-old David Nguyen, the Alameda Co. Sheriff’s Deputy recruit who was shot and killed while driving his car on 580 near the Bay Bridge Toll Plaza. The sheriff said the community would’ve been lucky to have him as an officer. pic.twitter.com/6QJs8ykRQ8

Isaac Demma, a fellow recruit shared memories of how the two became fast friends in the academy.

"David was one in a billion, I knew our friendship would last a lifetime. Weeks before he left us, we would talk about being old men together. Having families of our own. It's a shame we won't be able to be old men together." He said through periodic tears.

David never got to live out his dream of being in law enforcement. He was killed by gunfire along 580 while driving home January 4.

Born in Vietnam, he came to America and settled with his parents and younger sister Barbara in San Francisco's Bayview neighborhood. David later spent 8 years serving in the Army. His fellow soldiers, the California Highway Patrol, agencies from across the Bay Area and even those from Vietnamese media came to pay their respects.

The sister of Alameda County Sheriff's Office recruit, David Nguyen, is sharing memories after he was shot and killed on I-580 in Oakland Tuesday.

Despite the moments of pain as his mother became overwhelmed at seeing her only son's casket for the first time...there were many moments of joy.

Barbara laughed at one moment, joking that her brother would have loved to be at the funeral and seeing all of the support.

Barbara told ABC7 News days earlier, she had begun to get a tattoo to match David's. Her way to pay tribute to her best friend.

David's large group of friends, also remembered the good times. Many, like Joanna Ho, Lucenda DeLeon and Antonia Chimezie spoke of a friends trip to Thailand.

Barbara, though, perhaps said it best. That this day was truly a celebration of life.

"It is our duty to continue living his legacy. To be kind. Compassionate and take care of your loved one. Take care of the community. That's what David would have wanted."

According to family and the ACLO Sherriff's Office, David was the breadwinner for his family. His parents are immigrants from Vietnam who live in San Francisco's Bayview.

David's death, which is being investigated by the California Highway Patrol comes amid a number of high-profile shooting deaths on Bay Area freeways -- like Jasper Wu, only 23 months old, on 880 and mother of two and 29-year old Amani Morris on I-80 -- both in November.

The sheriff's office set up a GoFundMe account to help David's family, you can visit here