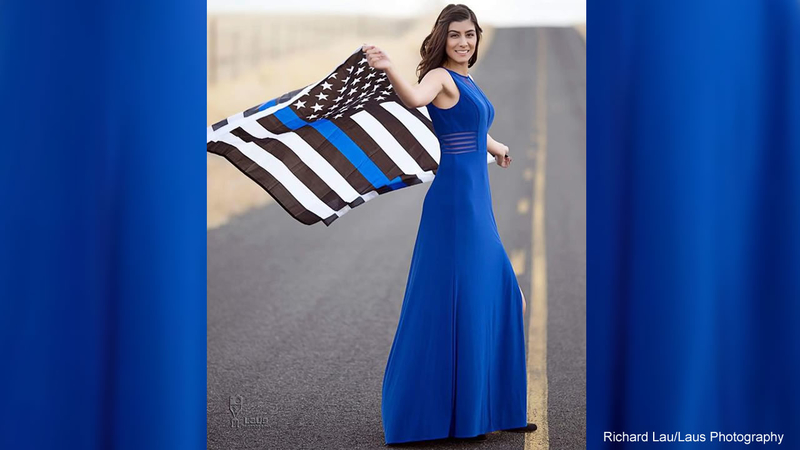 DAVIS, Calif. (KGO) -- Residents in the city of Davis say they are devastated that 22-year-old Officer Natalie Corona was shot to death last night while responding to a car accident.

"It really hits close to home. It's really devastating and upsetting for a community and I am really heartbroken, just really sad for her and her family. She was brand new to our city and it is really sad to see someone so eager and willing to be in this kind of work where so many people are being scrutinized right now. In this country right now there is such a debate, if we are for or against police officers, and this just breaks my heart I just wish it wasn't the case," said Davis resident Cynthia Ochoa who is studying law enforcement.

She says this is why her family worries about her chosen profession.

Davis resident Matt Fix just dropped off flowers in memory of Officer Natalie Corona, who was killed last night in the line of duty. pic.twitter.com/66bPkw516U

"When I told them I wanted to be a police officer, my mom freaked out. She really just didn't want this for me. It breaks my heart to see it be a reality. I am just really devastated," Ochoa said.

She stopped by the crime scene to drop off a bouquet of flowers.

Officer Corona was responding to a three-car accident just before 7 p.m. Thursday when she was shot and killed.

A crime scene investigator says it doesn't look like the killer was part of the car accident but walked up to the scene and started shooting.

They later found him inside his home on the same street as the accident.

"Once we finally got in he was deceased from a self inflicted gunshot wound," said Davis Police Lt. Paul Doroshov.

Police have not released the name of the man who they believe killed Corona.

They do not think Corona knew her killer. Officers have not said what the motive was behind the attack.

They say several shots were fired at the scene of the car accident. No one else was hurt.

Corona was new to the Davis police force and had just finished her field training before Christmas.

"When you see people who put their lives on the line everyday something tragic like this happens you just want to pay respects," he said.