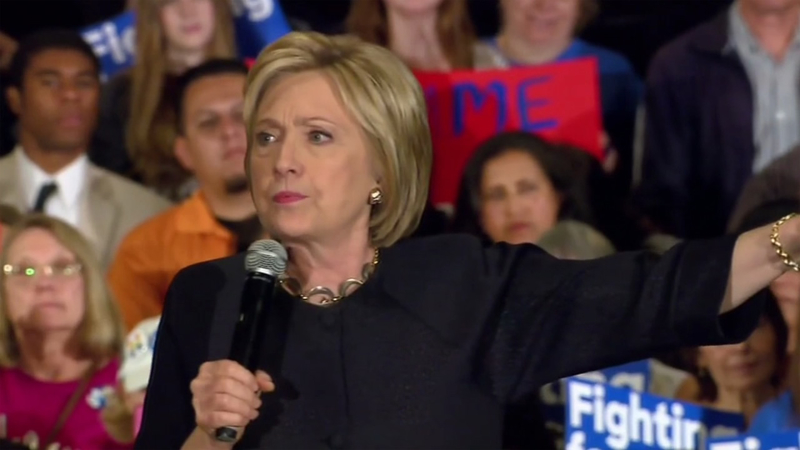 SAN JOSE, Calif. -- At a second Bay Area campaign rally this afternoon, Hillary Clinton told more than 200 supporters in San Francisco that she is the presidential candidate who can unify the United States, command the armed forces and get results.

Clinton came on stage at about 5 p.m. below a gold gilded ceiling and between gold gilded walls at The Hibernia Bank at 1 Jones St. to cheering, sign-waving supporters on nearly all sides.

The presidential hopeful and former Secretary of State wore a navy blue pantsuit as well as a necklace, bracelet and earrings.

"Our economy does better when we have a Democrat in the White House," Clinton claimed.

She harkened to the 90s when her husband was president and the U.S. had a budget surplus.

Clinton wants America to manufacture the inventions made in the U.S.

She wants to invest in renewable energy jobs, raise the national minimum wage, make community college free and get students through a four-year college or university without student debt.

She got especially loud cheers when she spoke about mental health and addiction.

"They do not belong in jails and prisons," Clinton said. "They belong in treatment facilities."

Earlier in San Jose, her supporters shook blue signs pasted with Clinton's campaign slogan, "Fighting for us," when she stepped onstage at Parkside Hall.