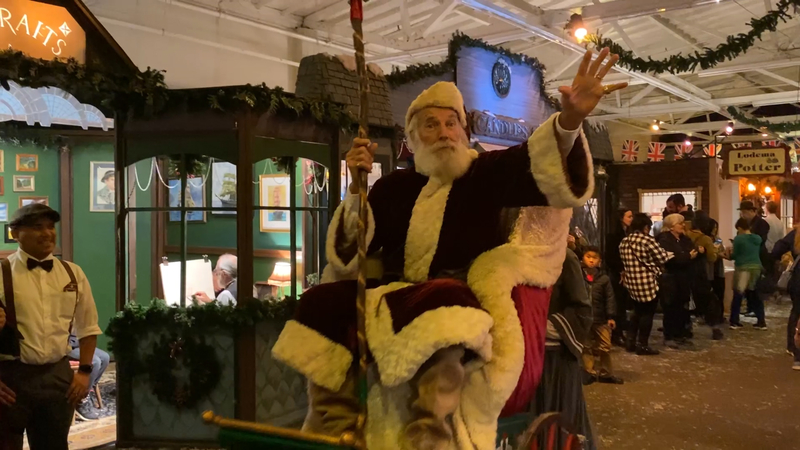 It is a Christmas event unlike any other in the world.

"We have more of the characters of Charles Dickens novels brought to life than any other theatrical production or European Christmas fair," explained Executive Director Kevin Patterson. "It is really a blend of a juried craft show, environmental theater and a living library brought to life of Charles Dickens works. We find that when people come to the Dickens Christmas Fair, they immediately determine that it is a new tradition for them. They come back year after year as the thing that really kicks off their holidays and gets them in the spirit."

Patterson's family began the Victorian Christmas experience in 1970 on the Embarcadero.

At the fair, you step into Victorian London on Christmas Eve. Hundreds of characters roam the more than 3 acres of live action exhibits, shops and attractions. You may even get to hear the stories of Charles Dickens told by the man himself! pic.twitter.com/u5WFShQi0r

From there, it has grown to a 3.5-acre mini London right in the Cow Palace exhibition halls.

My favorite part? The food! The fair serves fish and chips that some describe as better than in London and Bangers and Mash that is actually shipped from across the pond to SF for the people at the fair! pic.twitter.com/0xXdK0fd40

RELATED: Holiday cheer at Fantasy of Lights in Los Gatos

"There's over 800 performers at 100 handcrafted booths and over a dozen eateries and Old English pubs," Patterson said. "We invite people to come and be in costume or come as they are and enjoy the holidays with us as if they were in the Victorian era on Christmas Eve."

Charles Dickens' "A Christmas Carol" shares the story of the true meaning of Christmas and if you're lucky, you can live that story.

The Great Dickens Christmas Fair brings that idea to life.

You can visit the Great Dickens Christmas Fair on Weekends at the Cow Palace. See what it’s like to have the work of Charles Dickens come to life in front of your very eyes! pic.twitter.com/SwfagGo6hy