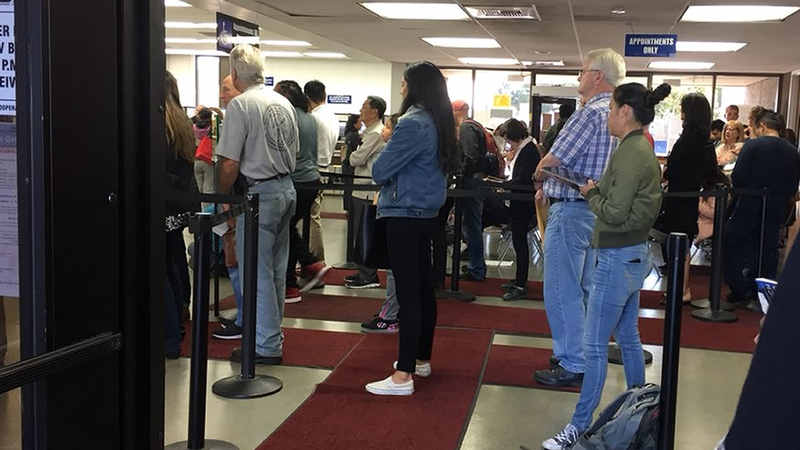 SAN FRANCISCO (KGO) -- There are more problems for the California Department of Motor Vehicles as a technical glitch forced major delays at dozens of field offices across the state.

"It's always frustrating when you go to the DMV," said Oakland resident Louisa Lynn. "They're still kind of doing the things that we were doing 10 years ago and still working in an archaic system that can't seem to keep up with the population of drivers."

As lines continued to grow throughout the morning, DMV engineers scrambled to fix a router issue that stalled services and transactions from being processed.

"The earliest appointment I was able to get was in December... and I can't wait until then to get a replacement ID," said Richard Alcera of Hayward.

The DMV was criticized in recent months for skyrocketing wait times, which until Thursday's hiccup, had reportedly been getting better. Officials say the outage occurred overnight but went unnoticed until employees came into work Thursday morning.

"It is kind of upsetting. It's like I'm kind of mad at myself, too, for losing my ID, but at the same time, it's like I wish this line would move faster so that I could get out of here as soon as possible," says Alcera.

The agency hopes to modernize its decades-old computer system within the next four years, but until then, many customers are trying to take it all in stride.

"When things go wrong, they're wrong. It's not going to go smoothly, so you just have to kind of accept it," said Fremont resident Corey Freund.

Some DMV field offices reported computer outages lasting up to four hours. At least 12 locations in the Bay Area were impacted.

Customers at the #Fremont #CADMV office are being given the option of either rescheduling their appointments or waiting it out in hopes that the system comes back online. #MORE: https://t.co/A7fTkAbeJk #BayArea pic.twitter.com/XGqDA4kYVV

Technical outage (which means systems are down) at numerous #CADMV field offices throughout the state. #Fremont is one of the impacted locations. Transactions can’t be processed. Drive tests are still happening. #BayArea pic.twitter.com/RHCrvLjAUk

San Mateo office is down :/ still a ton of people waiting.

They just announced there is no ETA or update and the last time servers went down statewide it lasted a week. I just left after waiting 2 1/2 hours. Here’s a better photo: pic.twitter.com/qXuYFQT3FE

Tell me about it. I got to Los Gatos at 6:45am and still sitting here. Afraid systems will come back up the moment I decide to leave.

Huge shout out to San Fran DMV staffer “KP” who is handing out water while we wait. #PeoplePower #CustomerExperience pic.twitter.com/18ouhZTp3g

Employees telling us it can take hours for systems to be brought back to life. They told us it was due to some programming error. Woke up at 5AM for a non appointment walk-in. Ticket#G001, first one. Line is out the door. No movement inside. pic.twitter.com/igLmMdVk5p

Tired of waiting here at the Chula Vista location. Coming back around noon. Looks like people realized there is no hope in getting the system back online. Line looks almost exactly when I got here. Completely empty... 😢😭😬 pic.twitter.com/yTg8tH4Q67