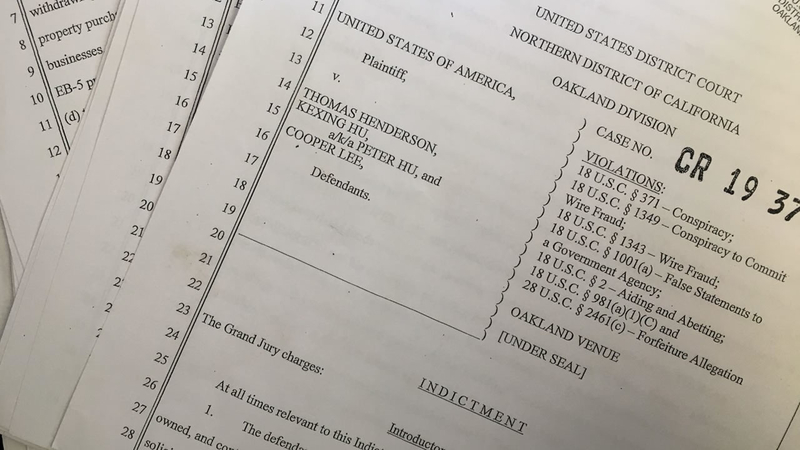 OAKLAND, Calif. (KGO) -- An Oakland businessman appeared in federal court Tuesday, just hours after being arrested. He's one of three men facing federal charges, accused of using investments immigrants made as a part of a Visa Program for citizenship, to buy real estate, including Oakland's Tribune tower.

They were supposed to create 2,000 jobs in Oakland. But instead, the US Attorney said the three defendants took more than $100 million from more than 200 people, mostly from China, who thought they were making an investment as a path to citizenship in the U.S. Now, their money and their dreams of citizenship are gone.

"Live. Learn. Enjoy. Safe Investments to set your family on the path to American Citizenship." That's the first thing you see on the website for San Francisco Regional Center, or SFRC. But according to this indictment, the people who used the company weren't safe. They were victims of a scheme.

"This case is the largest EB-5 fraud ever charged criminally in the state of California," says David Anderson, U.S. Attorney for the Northern District of California. Anderson prepared the indictment, which alleges 70-year-old Tom Henderson used his company, the San Francisco Regional Center, to exploit the EB-5 Visa Program.

Investors in China, India and Vietnam each paid Thomas Henderson $500,000 thinking they were funding one of seven SFRC businesses that qualified for the EB-5 program. The federal program gives green cards to investors who contribute $500,000 to a U.S. business that creates at least 10 full time jobs.

Instead, the indictment says Henderson diverted the money to buy the historic Tribune Tower in Oakland, the I. Magnin Building, and other properties, businesses and restaurants.

According to the indictment, Henderson lied to investors and the government for years, providing paperwork and business plans that seemed legit from 2011 to 2017. ABC7 News asked the U.S. attorney how it was able to go on for so long.

"One of the ways in which this scheme was being hidden was the diversion of money raised from later investors to cover over the losses that were being suffered by earlier investors," Anderson said.

Now, Henderson is facing charges of conspiracy and wire fraud He pleaded not guilty Tuesday in court and was released on a $250,000 dollar bond. His next court date is on Oct. 1.

A second defendant, Cooper Lee, was arrested Tuesday morning in Laguna Beach. He is facing conspiracy and wire fraud charges too, but they haven't set a court date for him yet.