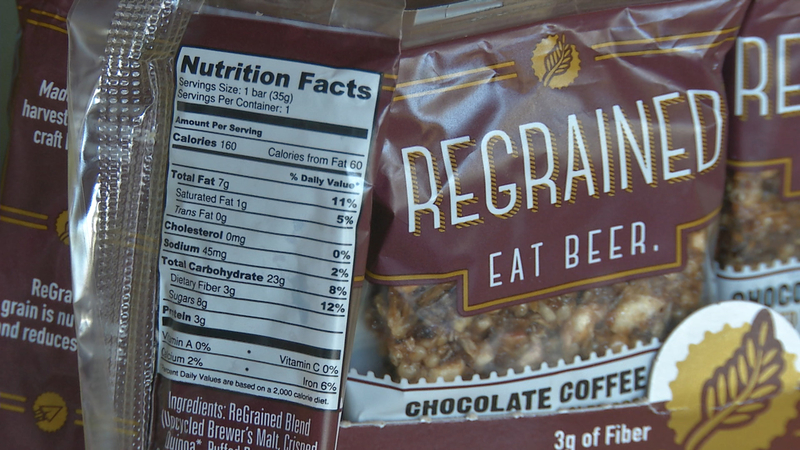 SAN FRANCISCO (KGO) -- There are 5,000 craft breweries nationwide that produce a staggering 775-million gallons of beer. All that brewing creates billions of pounds of waste that often just gets thrown away, until now. A Peninsula startup is hoping you'll eat that beer waste.

At Triple Voodoo Brewing Company and Tap Room in San Francisco's Dogpatch neighborhood they have a number of unique beers available. They're all made with the finest hops, yeast and malt. But, what's left over after making all that beer creates a huge amount of waste.

Triple Voodoo brewer Phil Meeker said, "We pay the city to take our spent grain away, essentially our waste away."

That spent grain usually would be composted, but today, Meeker is giving it away to some Peninsula entrepreneurs.

"What we are doing is taking this grain that was already used to make beer. What's left is all the protein and the fiber and we turn it into an ingredient to be used in baked goods," said Dan Kruzrock, one of the co-founders of ReGrained. He and Jordan Schwartz are using a proprietary drying technique they are turning all that beer waste into "supergrain" snack bars. They make them at a community kitchen in San Mateo.

They got the idea while making beer in college.

"I was just blown away by how much grain was left behind every time we made a batch," said Kurzrock.

For every 5 gallons of beer, there was 20 to 30 pounds of grain waste.

"And so we had nothing to do but toss it. I felt like I was throwing away food," added Kurzock. "So a kind of light bulb went off that the creation of beer, actually also creates food."

Kurzock and Schwartz started baking bread from the spent grain and giving it away to friends who loved it! That's when they realized they were on to something.

It turns out that spent beer grain is low in sugar and high in healthy nutrients. ReGrained calls it edible up-cycling.

Both are sold in health and specialty stores around the Bay Area for about $2.50 each. ReGrained is planning to expand to other baked goods and is working on marketing a flour made from spent beer waste.

Schwartz says the best thing about these tasty treats, "It doesn't give you a beer belly. It actually gives you a nice fit six pack belly."