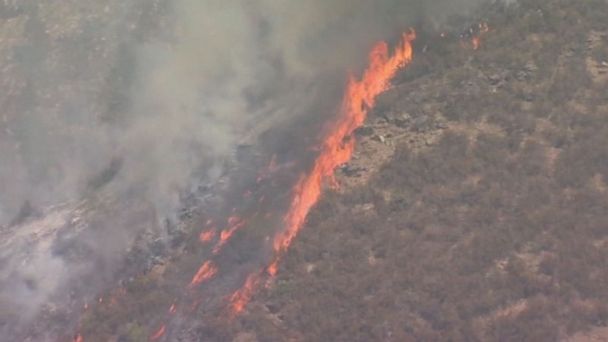 Critical fire danger is forecast for the West over the next three days, as gusty and very dry winds move from the Rockies into California. Parts of Northern and Southern California are under extreme fire danger later today and tomorrow.

One fire is already exploding in central California's Mariposa County, where the Briceburg fire went from 550 acres Tuesday morning to 2,000 acres in the early evening. About 1,000 firefighters are battling the flames on a very steep terrain.

The wildfire concerns, along with incoming windy and dry weather, are forcing nearly 800,000 Californians to be without power Wednesday due to PG&E's decision to cut power to many customers.

With this cold air mass comes snow from the Rockies to the Upper Midwest, where more than a foot of snow is possible.

Tonight Denver will begin its crash, with temperatures going from the 80s Wednesday afternoon to the teens by Thursday night -- a nearly 65-degree temperature drop in just a day or so.

After the Rockies, the winter storm has its eyes set on the Upper Midwest, especially the Dakotas, where by Friday into Saturday rain will change into snow, and heavy snow is expected Saturday with gusty winds up to 45 mph. This will create whiteout conditions that could force interstate road closures in the area.

While the heaviest snow will fall only in the northern states, the coldest air of the season will move all the way to the Gulf Coast, where even Dallas and Houston could see temperatures in the 40s and lower 50s.

Many areas in the Midwest and the Great Lakes could see their first freeze and frost of the season, from Oklahoma to Michigan.
Report a correction or typo
Related topics:
abc newsnational
Copyright © 2020 ABC News Internet Ventures.
More Videos
From CNN Newsource affiliates
TOP STORIES