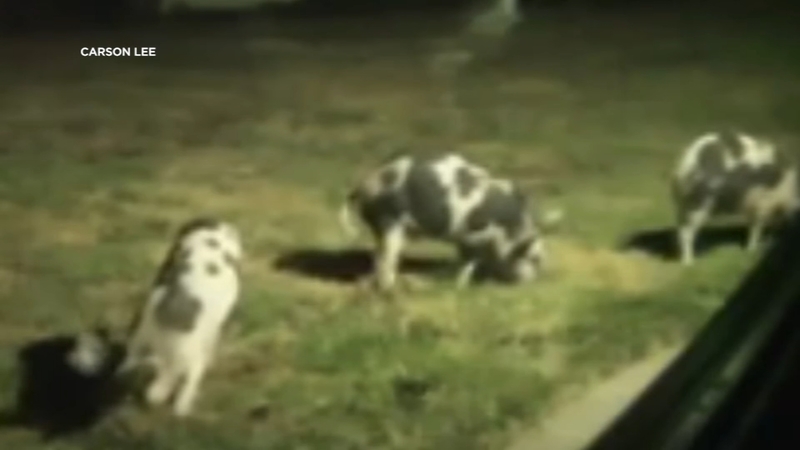 NAPA, Calif. (KGO) -- State Senator Bill Dodd wants to make it easier for people to hunt pesky wild pigs. He pointed to destruction, potential dangers and public health risks as reasons behind his push to get the state's feral pig population under control.

Many have seen the surveillance footage- video after video of wild pigs plodding through Bay Area communities.

However, these nocturnal animals are not shy about ripping through lawns.

His district spans parts of six counties including Contra Costa, Solano and Sonoma.

Sen. Dodd recently introduced SB-856, a bill that would replace the current wild pig tag requirement. As it stands, licensed hunters in California need to have a tag for each wild pig killed.

"There are no tags in this particular case," Dodd described. "They get licensed and they're free to go out and take as many as they want."

The wild pigs are at it again -- This time in San Ramon where one homeowner sent ABC7 News video of his front lawn chewed up by the foraging animals.

His bill would instead require a wild pig validation that would allow residents to pay $15 for a hunting license. Non-residents would be charged $50.

"They're just wild. And they're proliferating and doing just billions of dollars of damage to businesses, to agriculture, to our communities, school yards and soccer fields, football fields," Dodd continued. "So, we aim to do something about that will allow a special license to be able to hunt these feral pigs."

"Most residents of the Bay Area want fewer guns in our communities and less cruelty as well," Wayne Hsiung with the animal rights group, Direct Action Everywhere told ABC7 News. "This bill will do the opposite."

Hsiung said the focus should be on seeking humane alternatives.

"Just as we've done with dogs and cats that are strays, there are plenty of ways for us to use sterilization for example," he continued.

RELATED: SJ votes against using bow and arrow to take out wild pigs

Sen. Dodd said, "For those out there that think this maybe sounds stark, we're talking about the amount of these wild pigs are in the hundreds-and-hundreds of thousands. So, control really needs to be taken."

Beyond the wild pigs proliferating throughout the state, he said the animals are costing billions of dollars in damage.

"I know I spent thousands of dollars because I had 100% damage," San Jose resident Sharam Assary told ABC7 News. "And that's just one house."

At least five homes in a Lafayette neighborhood had lawns torn up by feral pigs.

Back in October 2020, Assary showed ABC7 News the destruction of his entire front lawn, caused by the wild pigs.

Since then, he said he replaced the grass and watched the animals return.

Assary said he then installed a fence around the lawn, but it's done little to deter the wild pigs.

He explained, he doesn't know the answer, but knows something must be done.

"I'd like to have something in-between," he said, after learning about Dodd's plan. "Not necessarily going and shooting around, but at the same time, make it easier for professionals to handle them properly."

Dodd's bill would also ban anyone from trapping, then releasing the animals elsewhere.

"That makes no sense, whatsoever," Dodd told ABC7 News. "There's also the opportunity for some people to take them and release them on a ranch and set up a hunting preserve. We're not interested in that."

He added, "There's really not many other ways that this can be done, particularly on the scale that it has to be done."

Sen. Dodd expects the first legislative hearing on the bill in the next 30 to 45 days.