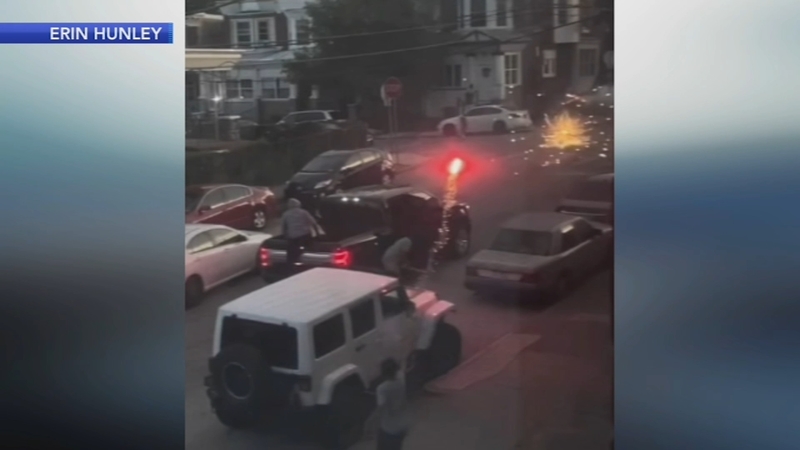 PHILADELPHIA -- Neighbors in one Philadelphia area said they are growing increasingly frustrated with people setting off fireworks at all hours of the night.

"You didn't know whether it was firecrackers or guns," said resident Miss Edens. "I peek out the door, I saw a light, I say, 'Oh it is firecrackers but it is scary because we don't need that.'"

In a video that's going viral online, a group of people can be seen throwing fireworks at each other at an intersection in the city's 's Logan section last Thursday.

"The whole neighborhood is in an uproar because we can't sleep at night," said Renee Hunley. "It's a pain to us because when they send them (firecrackers) up, the paper comes down, it's all in my yard, it's all over my car and they're not coming back to clean it."

Video captured a dangerous fireworks street fight in the middle of an intersection in Philadelphia's Logan section.

Logan resident Troy Smith said he believes people are blowing the fireworks fight out of proportion and said it is better that people are playing with fireworks rather than shooting guns.

"They're little Roman candles that don't shoot that far," said Smith. "At the same time, if they were to hit you, they don't burn no clothes, they don't do none of that."

The City of Philadelphia fire code bans the use of consumer fireworks within 150 feet of occupied properties. The fire code also prohibits people from setting off fireworks on public or private land without permission.

In Pennsylvania and Philadelphia, it is legal to use ground-based fireworks, firecrackers, Roman candles, bottle rockets and other "consumer fireworks."

According to data from the City of Philadelphia, the use of Roman candles sent about 400 people to the emergency room in 2018, with injuries most common to the hands, fingers, legs, eyes, head and face.

Logan resident Erin Hunley said she has to be at work by 6 a.m. every morning and said fireworks have gone off every night for the last month.

"It's literally like outside of my window and the fact that it wakes me up out of my sleep, I can't go to sleep period," said Hunley. "Like, it's irritating."

While residents say at least one person was arrested as a result of the fireworks fight incident, Philadelphia police would not return our request for comment.
Report a correction or typo
Related topics:
pennsylvaniasafetycrimecaught on videou.s. & worldfireworks
Copyright © 2021 WPVI-TV. All Rights Reserved.
More Videos
From CNN Newsource affiliates
TOP STORIES