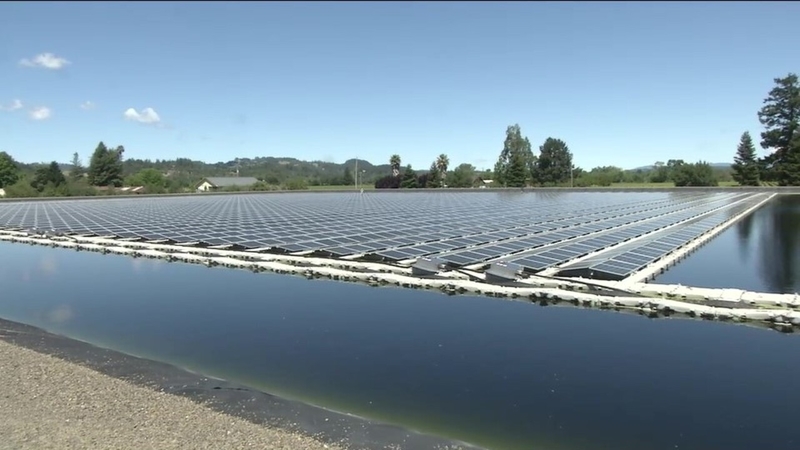 HEALDSBURG, Calif. (KGO) -- Perched along the Russian River, the town of Healdsburg is mostly known for great wine and weekend getaways. But these days the sun is doing more than ripening grapes. It's producing power in an unusual setting.

Crowley and wastewater manager Rob Scates are showing off what's believed to be the largest floating solar farm in the country.

The panels are anchored on the surface of two ponds at the city's wastewater treatment facility. And while they're floating, the panels are also supplying roughly 8% of the city's electrical needs.

Combined with renewable energy produced at a nearby geothermal site, the project could earn Healdsburg the title of the Wine Country's sustainable city.

Irrigation canals and aqueducts could soon help power thousands of California homes and businesses, thanks to a plan to cover them with solar.

"So when we combine it with our geothermal resources, we're looking at close to 50% renewable," says Crowley.

It's innovation that sprung in part from necessity. Scates says the shade provided by the panels cuts down on algae, growing in the treated water that's used to irrigate surrounding vineyards.

"Yeah, it's made the water definitely better. I have happy customers," says Scates.
And the multiple benefits of the water surface solar system are catching on.

In the Central Valley, Turlock is getting set to cover a local irrigation canal with solar panels for similar reasons, cutting algae and evaporation and generating power from publicly owned right of ways. The idea is especially appealing in areas like Sonoma County, where land prices have sky rocketed.

"You know, it's a local project that probably otherwise wouldn't be made because the land here is too expensive to install solar on it," Crowley points out.

And while it doesn't float on Cabernet, the solar installation is providing cost effective energy and clean irrigation water to one of the most popular wine producing areas in the world, with the promise of more to come.

Healdsburg is planning to add power from a different solar site in the near future, upping their use of renewable solar power to as much as 15% of the city's total.