The Out of the Barrel bartender says Jason Wood repeatedly refused to wear a mask, so when they cut him off she got a little worried and started recording.
KFSN
By Corin Hoggard 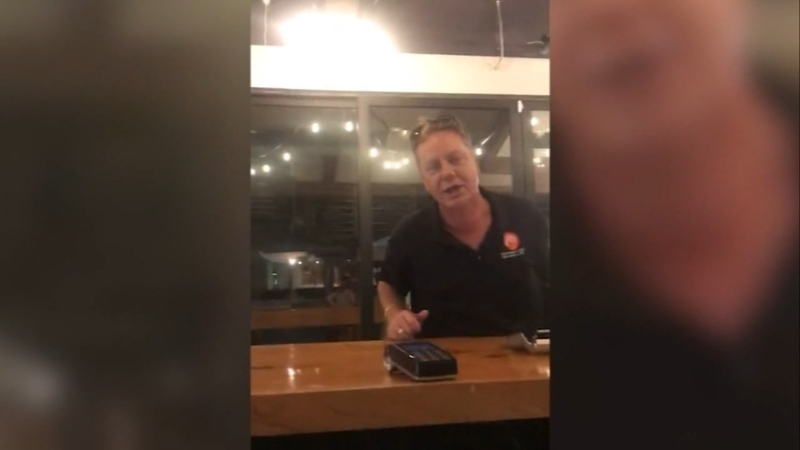 Racist rant: Consequences and an apology after Fresno bar incident

FRESNO, Calif. -- WARNING: Some parts of this story and some language may be disturbing to some readers.

A business traveler spewed an angry, racist rant at a Fresno bartender who cut him off this week and now he's facing consequences.

Hernandez says she's used to getting questions about her ethnicity at work, but on Tuesday a guy who got it all wrong aimed an aggressive rant at her.

"Honestly, that was the worst day in more than 10 years of being in the industry," she said. "The worst day I've had, and there have been some days."

Hernandez says Jason Wood was drunk and difficult at Out of the Barrel.

EXCLUSIVE: Bay Area man speaks out after woman tells his family 'you can't be in this country'
EMBED More News Videos

He had repeatedly refused to wear a mask even when he came inside, so when they cut him off she got a little worried and started recording.

Santa Clara University psychologist Dr. Thomas Plante tells us everybody has implicit biases - including some based on race or ethnicity or social status.

"So it's not just like we've got the good guys and the bad guys out there," Dr. Plante said. "It's just that how do we all deal with our implicit bias in a way so that we can behave appropriately and reasonably and treat people with some respect and compassion."

Wood has come to realize the lack of respect he showed Hernandez and sent our sister station Action News an apology for her.

"My words were unacceptable," he texted a reporter. "I am both embarrassed and saddened that I demonstrated this behavior. They were a result of being physically impaired, frustrated, and stupid. They are not representative of my personal beliefs or those of my company."

His company wiped its social media pages clean and isn't answering its phones anymore. On their website the following statement was posted: "Due to recent events, Actionable Insights is announcing the resignation of Mr. Jason Wood as our Chief Executive Officer, effective immediately. This is a direct result of his recent unacceptable actions which are not representative of our core values.During this time of progressive social change, we are committed to ensure our company embodies a spirit of equality and respect for all people. On behalf of Mr. Wood and Actionable Insights, we extend our deepest apologies. It is our hope that we can move forward, and our reputation for integrity and excellence will navigate us through this difficult time."

Another company with the same name changed its website to tell people Wood doesn't work for them and they condemn his behavior.

Hundreds of people have signed a change.org petition to remove Wood as CEO of Actionable Insights.

Hernandez does want him to pay a price for it. That's why she posted the video.

But she doesn't support a mob mentality.

She wants people to look inward and try to get rid of their prejudices.

"It's not about 'Let's ruin Jason's life altogether and burn him to the ground,'" she said. "Let's use this as a platform and an experience so we can all learn and grow together collectively and be better."

Dr. Plante says people who are angry and frustrated don't often think about the consequences of a racist rant - especially if they're drunk - but both he and Hernandez hope seeing the ugly side of humanity will remind us all to lean on our inner angels instead of the demons.