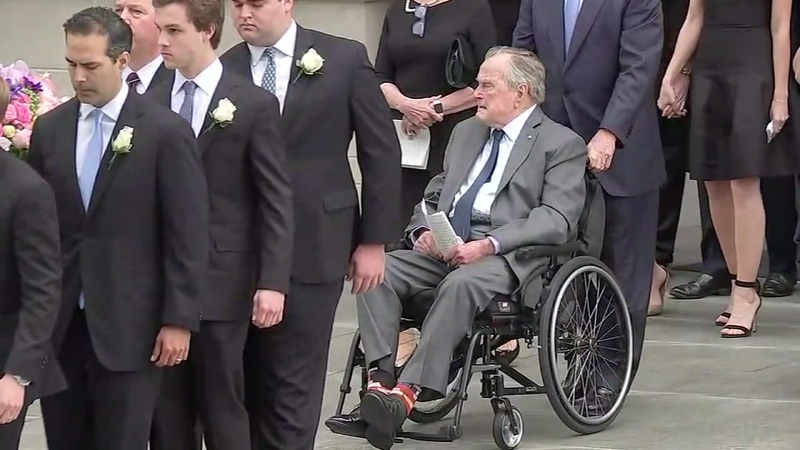 HOUSTON, Texas -- President George H.W. Bush has been hospitalized for an infection just a day after the burial of his wife Barbara.

A statement released Monday from Bush's office stated the former sitting president was admitted to Houston Methodist Hospital on Sunday morning "after contracting an infection that spread to his blood."

His office added Bush has been "responding to treatments and appears to be recovering."

The 93-year-old Bush was present for the public viewing Friday of his wife Barbara Bush at St. Martin's Episcopal Church. Barbara Bush passed away last Tuesday at 92.

The following is the statement in full, released Monday by Bush chief of staff, Jim McGrath:

"President Bush was admitted to the Houston Methodist Hospital yesterday morning after contracting an infection that spread to his blood. He is responding to treatments and appears to be recovering. We will issue additional updates as events warrant."

Statement by the Office of @GeorgeHWBush on President Bush's health. pic.twitter.com/8UkB53JHqD

Later Monday night, McGrath added that the former president has a goal to work toward:

"The 41st President wants to go to Maine this summer. He's the most goal oriented person on the planet and I would not bet against him."

George H.W. Bush has faced varying medical issues in recent years, requiring stays of multiple days in the hospital. His recent stay was in April 2017 when he spent two weeks for pneumonia and chronic bronchitis.

RELATED: George and Barbara Bush: A love story for the ages